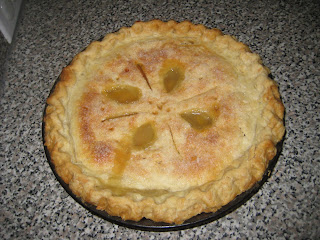 I thoroughly enjoy cooking. I learned to cook early in life, living by myself when I was in high school. I've always been the cook in my family and have had success passing this enjoyment on to all my children who are cooks in their own right.
I have an hour to write before I must stop to bake pies for dinner tonight. We are having as dinner guests Grandson Jon, his wife Bethany. I got "volunteered" to bake pies for dessert. Julie will fix tacos.
Julie started me to baking pies maybe 25 years ago. I still basically bake the pies as she taught me but I have followed the Walt Disney teaching and "plused them up". I once baked 25 pies in one day for a "Pie Social" at Julie's office for her 50th birthday. Another time, at the urging of friends, I baked pies for sale at Christmas time--that was a real mistake! I'm sure I lost money on the deal, along with a lot of pie plates. At bake sales my pies are always the first ones to sell because I have learned to make them beautiful. The "proof of the pudding" should be in the taste and I don't know that mine taste any better than others, but they do look better. My daughter, Kimberly, entertains a large number for Thanksgiving Dinner and I bake pies annually for that event. Today I will bake a peach and a pumpkin pie, the latter a favorite of my grandson Jon.
My pie crusts are so very flaky. What makes them that way is that I thoroughly chill the crisco before I make the crust, also I use icy water and a cool egg. Then I chill the balled crust before I roll it out between CUT RITE wax paper. I even use chilled water to wet my fingers as I flute the pies. When the pies come out of the oven the top crust will have raised a bit. Using my hands I softly press the crust flat with the result that the top crust becomes a layer of flakes.
There is a secret to cutting a crusty pie. Use a dull knife and the crust will just fall to pieces and look terrible. I have my own fluting. I make a flower of the top crust. Using a 3 pronged fork, I make a cross in the center of the pie. Then, using a thin, serated knife, constantly wetted in ice water, I cut a petal a half inch or so from the 4 points of the cross. Then, half way between the petals I cut four 2" slits across the pie. I then punch holes between the outer ends of the slits and the petals all around the pie. This make a pretty flower but it also makes a perfect way of cutting the pie. Using a thin, wet, serated knive cut the cooled, baked pie into 8 slices cutting through the slits and the petals. Perfect slices each and every time.
Before I flute the pie I brush the top crust with melted butter--real butter. I then "sprinkle it with love"(sugar). If you have young children present they love helping you "sprinkle the love". Keeping my hands wetted with ice water, I roll the edge of the top crust placed on the pie into a roll. Once I have a perfect rounded crust edge, I flute it. Have you ever noticed how the crust loses shape when it is baked? To get around that, using cold, wet hands make a deep--really deep--hole with your little finger poked between two fingers of the other hand. I then cover the pie crust with a pie ring before baking it. If you don't have a pie ring you can make one of foil as I did in the picture in this blog site.
Wow! Time flys when you are having fun. It is now 15 minutes past the time when I should be baking pies. I'll write my vinegar crust receipt and call it a blog. I'll describe my pie fillings in another blog.
Measure 3 Cups of flour, 1 tsp of salt in a bowl. I use a fork to blend in 1 1/4 cups of chilled crisco. I measure the crisco carefully using a special measure. To these dry ingriedents I add a mixture of a beat egg, 1 tblsp of apple vinegar, and 4 tblsp of chilled water--depending upon how dry the flour is the water may vary a wee bit. I devide the crusts into 3 balls each of which will make a pie crust. I put each ball into a plastic bag and refridgerate until I use it.
You will know that you have done it right when people not only eat the entire crust but use their fingers to pick up the flakes that remain on the plate. 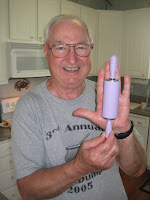 Well........I've baked the pies. What an experience! Getting paid back for my immodest bragging about the beauty of my pies. Cooking in a strange kitchen has it's drawbacks. I only had one regular 9" pie plate and one deep dish pie plate. I baked the peach pie first but didn't have any food coloring. Peach pie is supposed to be yellow. It only takes 4 drops of yellow but 4 drops I didn't have. Oh, well. It could get worse, and did. When I started to mix up the pumpkin pie I didn't have any condensed milk or cloves. My granddaughter's husband, Mike, quickly went to a nearby gas-station-cum-country-store and got the milk. No cloves. While I awaited the milk I had mixed the spices into the pumpkin. The two eggs were placed at the back of the counter so as not to roll off. I added the milk, poured the mixture into the shell and put it into the oven. I then proceeded to wipe down the counter top and discovered the two eggs. Pumpkin pie without the eggs is not pumpkin pie. What to do? My wife suggested beating up the eggs and stirring it into the pie. I did just that. The pie raised alright. I don't know what it will taste like. When I stirred in the eggs I got pumpkin all over the crust. A beautiful pie it is not. Will my grandson mind? Not at all, if it tastes good. Anyone can be a cook when they have everthing they need with which to cook. Once in the north woods I made a rolling pin from a tree limb. Today I used the only rolling pin available. It was only 4 inches long. Try rolling out a pie crust with a 4" rolling pin sometime. Life is truly exciting!
Now, may your troubles be few, your blessings be more and may only happiness come through your door. God bless!
Posted by Walt Pierce at 11:19 AM