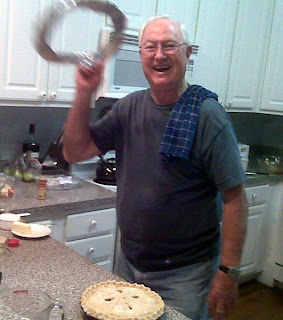 I am Walsine Hudson Pierce. I believe myself to be the only "Walsine" in the world. My dad named me Walsine but lost the courage of his conviction and always called me Walter. My siblings called me Walt.

There once was another Walsine, my name sake, Walsine Stevens. He was my grandmother's teenage beau and she tried to influence my dad to name each of my older brothers by this unusal name. Dad named my oldest brother after his father and the next son after himself. He loved his mother beyond measure, however, and not only named me "Walsine" but also "Hudson" which was Grandma Pierce's maiden name.

How pleased she would be today could she but know that not only a grandson but that also a great, a great-great and a great-great-great grandson carry on her proud family name. Born in 1857, Grandma Pierce remembered the Civil War.

"Old Doc Yost" drove his horse and buggy up the muddy road alongside the railroad track in Point Pleasant, WV on a rainy, Tuesday afternoon on the 31st of March 1931 to deliver my Mother's fifth and last child. I remember both the great depression and World War II. It grieved me that I was too young to join in the fight alongside my two brothers in that war. When I was 16 and a senior in high school I lied about my age and joined the WV National Guard. As soon as I graduated from high school at the age of 17 I joined the Navy.

Although I served briefly as a Radioman on an aircraft carrier and a destroyer escort, most of my tour of duty was on a sea going tug, the USS Yuma ATF94.

I loved the Yuma--she was a real feeder! "Join the Navy and see the world". I sailed extensively throughout the Pacific, the Sea of Japan, the Phillipine Sea and the East and South China Seas on the Yuma. I was on the Yuma in the war zone when the Korean War started and Uncle Harry Truman "suggested" that I extend my enlistment for another year. I "agreed" to his "suggestion.

Later, after an operation for a broken wrist, I was assigned as part of a skelton crew to sail the USS Intrepid CV11 from San Francisco, CA, through the Panama Canal and up the east coast to Portsmouth, VA. I ended my enlistment sailing the Carribean and crossing the Atlantic for a good will tour of Europe on the USS Hemminger DE746. My DD214 states that I had served for 4 years, 9 months and 17 days. Go Navy!

After growing up in the Navy I got a two year degree in Accounting and Business Management from the Barberton School of Commerce and commenced what would become a life-long attendance of night school at the University of Akron. I became an Industrial Manager working for 27 years in a tire plant, my last 8 years as Manager of Tire Production.

In May of 1981 when Firestone closed 10 North American tire plants and Goodyear closed 11 my wife and I both lost our jobs. I took the opportunity to take a long vacation touring the United States, Canada and Mexico for three months in a travel trailer and then went to work as a stock broker for Merrill Lynch. After a contractual 2 years with Merrill I joined up with Prudential-Bache. I remained with Pru until I retired as a Vice President of Investments at the age of 60.

Along the way I have been married twice. My first wife died of breast cancer. I have now been married to Julie Ann for 27 years. I have two sons and a daughter and also a step son and daughter. All my children have graduate degrees and are professionals married to professionals. Between us Julie and I we have 18 grandchildren and are awaiting the arrival of our 6th great grandchild.

I am now 77 years of age. At 6 foot 2 inches and 230 pounds I am still a big, strong man in relatively good health. I still have my own hair and teeth although not as much of either as I once had. My hair is completely gray and my teeth are more crowns than otherwise.

In the 17 years of my retirement I have continued to travel throughout the world. I've backpacked at home and abroad and have hiked 600 miles of the Appalachian Trail. I've made many canoe expeditions to the north woods of North America with my brother Henry or my sons or grand son. I have lived alone in the Boundry Water Canoe Area Wilderness for a month at a time with only a dog for companionship.

I have sailed the great lakes and the rivers. I've caught my share of fish. I've trained dogs and competed in obedience trials in three states. I've taught dancing classes and call square dances. I play a banjo in a jug band. I cook for family and for small and large affairs. I love to cook and enjoy baking pies.

My wife and I are Christians and are active members of a small, country church--the Easton United Methodist Church--where we enjoy a wonderful Christian fellowship with a host of friends. I am a Certified Lay Speaker and speak at various community affairs where I tell stories, recite poetry and lead sing-alongs with the banjo.

My next big adventure, and the reason for this blog, will be to cross the country on the http://www.adventure%20cycling%20association/Southern Tier bicycle trail on a tricycle. I had planned to make this trip a few years ago but ruptured a disc in my lower back while training on a road bike. I can no longer ride an upright bike.

I've now bought a new recumbent trike from Terra Trike. I plan to leave San Diego, CA on February 1, 2009 and take about two months to get to Saint Augustine, FL and then on up the east coast to Myrtle Beach, SC. While I am on these long trips my wife joins me from time-to-time for a "honeymoon". She will fly to meet me in Phoenix, AZ where we have friends and then in mid April she will drive the van to Myrtle Beach for a brief vacation at the beach and then bring me home.

I am Walt Pierce and life is good!

After reading your blog, I realize that seize the day would not be an appropriate phrase here, Your lifetime has been so full of seize the day moments, I believe this blog is about seizing the years. Love, Jennifer

Hey Walt - I'm commenting from my desk at Crossroads, wishing I could see the ocean too!

You will love blogging, you'll find yourself thinking about how every event translates into words from now on! It's a blast. Have fun!

Hey, Dad; your site is awesome! I suppose if Mark could get me to become a Sam's Club member, we shouldn't be suprised that he finally convinced you to start a blog - hahahahahaha

Greatness comes from greatness! I now understand that my Pastor not only has an amazing heavenly father but also an earthly father. Thank you for sharing. I read Mark's Blog faithfully to understand the inner workings of our church, its staff and our mission. I can't imagine my father blogging...he is a very private man, but a lot of people could learn from his life as I am sure people will learn from yours!