IS THERE A MASTER PLAN II: Wadda-u-think? 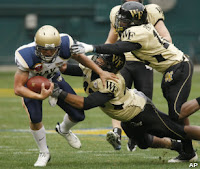 Every day is a good day! Even the bad days seem to have some saving grace. Yes, it is true. Navy lost to Wake Forest 29-19 to start the BCS bowl games.

But, today I commence the "Master's Plan" to get me in shape for my upcoming cross country trike ride. Yea!

Just making a cross country trip on a trike is a challenge. But when I announced my plan to my dinner group, my friend, John Murphy--another good old Irish boy--said, "Don't just do the ride, Walt, do the ride to help something you believe in".

That's how the decision was made to ride the 3,000 miles as a "Charity Ride". I would ride for pennies-per-mile to raise funds to reinovate the sanctuary of the little, white and historic UMC church which I attend. The plan is to seek pledges from friends, neighbors and businesses for support. All costs will be donated and all support staff will be volunteers.

One of the volunteer support staff, Kathy Hatfield, will solicit pledges from the twenty or so United Methodist Churches in the Canal District. The Church of the Master UMC in Akron has already made and paid their pledge of over three cents per mile, ($100).

A month or so ago I complied with a plea for articles on outreach for possible publication in the winter edition of The Interpreter, the UMC magazine. I submitted two articles, one on our Jug Band and another on my upcoming Charity Ride. I do not think for one minute that it was "luck" that the article on the charity ride was chosen to be published. This article will most effectively put my fund rasing attempt before the district pastors without any costs. Great!

Then, this past week I received a call from a lady by the name of Iolene from Canal District Headquarters. It seems as how there is going to be a party for the District Leaders and Pastors on January 17th at the local Johnson United Methodist Church. I was invited to provide the party with a dance program to include square dancing. By faith I accepted the invitation. There is one thing for certain about my program. In addition to a 'Husband Calling Contest' there will be commercial breaks. What commercial you may ask? What else, my charity bike ride.

You might believe it was luck, maybe brought on by a couple of lucky rabbit feet, getting my request before the leaders of the churches in the district by a third party and also in person. I cannot say you are wrong, for your belief. As for me, I assure you, these two opportunites are just part of "The Master's Plan". Praise God from whom all mercies flow!

Proverbs 3:6
In all thy ways acknowledge him, and he shall direct thy paths".