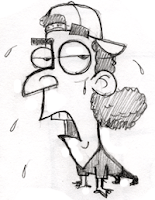 In his daily pastorial blog today my son was looking for companions in a program that would result in the ability to do 100 pushups in a few weeks. Just goes to reinforce the truth that you cannot believe everything you hear (read).

Most Dads taught their sons to walk and to play paddy cake. Not Dad. He taught his sons to "bob and weave" and to "jab and cross". That might sound funny if it was meant as a joke. It wasn't. That's the way it was. To make sure we were scrappers Dad made us fight kids we couldn't whip. Wanted to be sure we were doing our "best".

In my 12th and 13th summers Dad regularly brought home fellow drunks with whom he bet two dollars that his 12 year old son could whip them. I was tall, long armed, quick and well experienced not to mention sober. I've no idea of how many drunks I punched out with boxing gloves. Incidently, Dad never shared the two dollar bets.

Once when my older brother Ray was home from the army in WW II, Dad had me put the gloves on with a stranger who turned out to be a very experienced boxer. He was a grown man, I was a light weight kid. I couldn't whip him. He was a challenge, to say the least.

Mom whispered to Ray--6' 4" a real hunk and eight years my senior--that she would give him fifty cents if he would whip that guy. The guy like to have beat Ray to a pulp.

The man told Dad his face would burn for a week from the leather I put on him but I was too light to hurt him. He said Ray was easy. I don't know if Mom gave Ray the fifty cents or not but he sure earned it. Ray was a horse of man but he just wasn't inclined to be a scrapper. 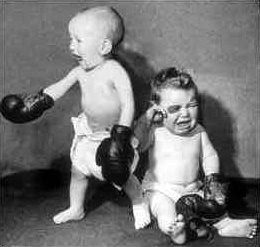 Being a faithful father, I taught my two boys to fight also. When my brother Henry, who was a serious scrapper, came to visit one of his first requests was "let the boys fight". And they did. The gloves were big enough to keep them from badly hurting each other.

I went to great lengths to reinforce my belief that there was seldom a cause worth fighting over. And always, only they, themseves, should decide when to put up their dukes and have at it. Some times, however, there are situations when getting physical is justified.

The last man I hit was one of a pair holding my son's at gun point in a robbery attempt. A short, maybe 8", blow from a sitting position knocked the man unconscious. When he came to my Case "muskrat skinner" knife point was at his throat. He had been beating on me with a loaded shotgun for a couple hours. Without the shot gun he wasn't nearly as tough.

In the end he and his pardner went to prison for several years. That was some forty years ago. Thank's Dad! You were a rascal but you gave me the "spit in the eye" which I've passed on.

In kindergarden Mark busted the nose of a bully. The older kid had been giving Mark a hard time for weeks. I told Mark to walk up to the boy at recess and bust him in the nose. He missed his nose but busted his mouth, which bled copiously. I asked Mark what Freddie did when he was hit. Mark couldn't believe the lesson he learned, even as he told me. He said "Daddy, he just cried and cried".

Yes, Mark got sent to the office and I explained in detail to the principal who completely understood. It didn't hurt that Mark's teacher, Mrs. Leach, was a close, family friend. Oh, yes! Freddie never bothered Mark again.

He went through the same experience in the 7th grade. Another bully, again a couple years older, was physically giving Mark and Todd a hard time. After several unsuccessful attempts to resolve the problem, I told Mark to get off the school bus ahead of the bully, jerk him off his feet when he followed Mark off the bus and give him a whipping before he knew what was happening to him. He did. While the boy's mother was unresponsive to my requests beforehand, she was not at all understanding when the shoe was on the other foot. No, the boy never again gave Mark a hard time.

When Mark was a junior in high school, he was about as fierce and fearless on the football field as my Dad. He was the scourge of the Suburban League as a middle guard and captain on Norton's football team.

Another bully grabbed Mark from behind in the showers following a gym class. Mark was a weight lifter then and, the last time I was in the Norton gym, he still held the all time record leg press. He had no problem throwing the boy over his head. The boy landed upside down in the shower as the teacher showed up. The bully let the entire school know he would take care of Mark at the end of the school day. Of course the teachers, and the princpal heard the story.

When Mark headed home the boy, with a large crowd, was waiting for Mark, still on school grounds. The tough was cool as he smoked, still on school grounds--unaware that the principal was watching it all. I didn't see the fight that ensued. I did see Mark's blue, flannel shirt when he got home. It was soaked in blood. Not his blood. Nor was it Mark who needed stitching up.

The other boy received several whacks with a paddle and was suspended. Mark got one soft whack, after which the principal asked Mark if he would like to work for him on his farm that summer. Mark did and, no, the bully never bothered Mark again to my knowledge. Alice Ruth, Mark's mother, and the principal's wife met weekly in a bible study/brunch with friends in one another's home. That didn't hurt either. Ummm.

I never knew of Mark being in another physical fight in his life. He learned the truth that things worth physically fighting about are few and far between. I've known him, however, to be in many a social, political or employment conflicts. The end results have always been the same. That is why I have no concern for his currently being forced to start his own church.

Unfortunately, in the end, I am convinced the blood will not be Mark's. Neither will he need the stitches. I am also convinced that, once again, the foolish will live to regret picking on a world class winner. Of course, there are no winners in a fight and there will not be in this situation. None-the-less, when forced upon a person, one cannot be avoided. Busted knuckles are better than cut down eyes and busted noses.

Will Mark be pleased with this blog?

Nah! Makes me feel better though.

Actually, I have to admit that I enjoyed reading every word. It is starred in my browser and I promise that I will read it often. Thanks Dad! I needed the life reminders! I love you. Mark