THE SOUR KRAUT? Can you say garbage disposal? 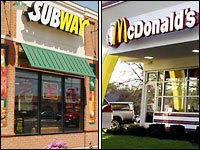 Julie called at 6:00PM last night coming home from work. When she had left for work that morning she told me we not to cook supper, we could just eat leftovers. I pleaded with her on the phone to please stop on the way home and pick up a couple sub sandwiches as I didn't think I could eat pork again. She said she was tired of subs and asked if I'd buy a pizza instead. I would have agreed to anything to get out of eating pork again.

In our house hold I'm the cook, except for the holidays. Julie cooks for the holidays. She is the best cook but the joke in the family is that I have to take her by the hand and lead her to the kitchen. She gets there so seldom. She is deliberate and slow, which is why her food is the very best. I can have the food on the table while she is digging through her recipes. At least that is my story and I'm sticking to it. 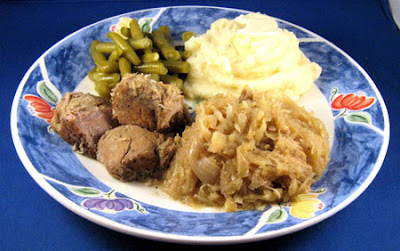 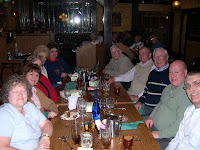 I'm so proud of the dining group to which Julie and I belong. We just had our annual Progressive Dinner. Donna and John Murphy had the 'entree. Delicious Medallion of Pork.

In addition to the excess of Pork & Sour Kraut we also had left overs from a dinner we had for Kimberly's family. Julie cooked the meal. The main 'entree? A Pork Roll with Cranberry Sauce.

Tonight we had Julie's son Randy, daughter-in-law Jen and grandson Erik for a dinner of left overs. I had taken the time to set a beautiful table and to create five beautiful salads fit for a gourmet.

When her son arrived he was blown away by the formal, holiday dinner table, with linen & napkins, chargers, silver, crystal, the whole nine yards. Even place names in Nut Cracker holders. Expecting to simply eat leftovers in the kitchen he informed us he had also invited his niece and her boyfriend. 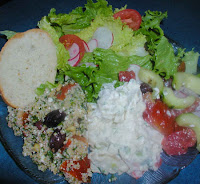 I quickly set two more complete place settings including place names. There was not time to prepare additional salads. I gave mine and Julie's salads to the granddaughter and her boyfriend replacing them with the simplest of salads. Although the granddaughter is in the latter stages of becoming a nurse, she is still a kid when it comes to eating. Neither she nor her boyfriend would eat their salad.

Randy and Erik proceeded to also eat the two extra gormet salads as Julie and I chowed down on iceberg lettuce and a few grape tomatoes. Sometimes being a gracious host is difficult!

After everyone had left and Julie was cleaning up she shouted up to me, "What shall I do with the left over sour kraut?'' Can you say garbage disposal? She didn't argue. That's probably the last pork we'll eat until next New Year's Day and I will have forgotten by then.

"One should eat to live, not live to eat".