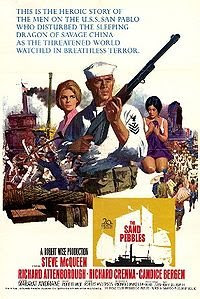 As I pedaled my trike on the trainer today I watched half of part one of the movie The Sand Pebble. This movie is listed on my blog profile as a favorite.

I so liked the main character, Jake Holman, that I named my last airdale after him. Walt's Courageous Jake. The character was an independent but honest and fearless Motor Machinest Mate First Class. 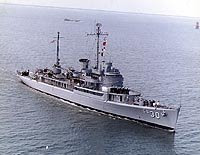 The "Sand Pebble" was the nickname of the USS San Pablo PR, number unknown. There was a real ship USS San Pablo, AVP30. She was in service in the Pacific during World War II, long after the fictional ship.

United States interests in China were protected by U.S. Navy gun boats for 200 years of uninterupted naval service, longer than in any other area. The boats that patrolled the Yangtze River were know as YangPat for Yangtze Patrol. Many of the men on the river patrol craft served their entire 20 to 30 years there, retired and stayed in China. They loved the duty in real life as much as in the fictional movie.

Four years before their cowardly attack on Pearl Harbor, Japanese planes attacked and sunk the USS Panay PR5, pictured to the right. On November 21, 1937, with the ship clearly flying her neutral colors plus having them painted on her awnings, Japanese pilots claimed to have mistaken the ship for their enemy.

The attack took place at midday as the crew were at dinner with their guns covered. They were removing civilians from a threatened American Embassy. Two bluejackets were killed along with one civilian. Eleven officers and men were wounded. Although the Japanese claim to be people of honor, their history is in conflict with that claim. I have not and will not own a Japanese car.

LESS WE FORGET, I wanted to write about these small ships because they had the most hazardous of duties in the most foreign of lands. Their crews may have had "ding how" shore leave but the duty and the pay was as bad as it could be. They served their country well. 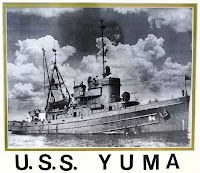 I sailed the East and the South China Seas during the Korean War. We were fighting the Chinese. None of that good Chinese Shore Leave. Boo! (I made up for it, however, in Japan.) I was the Radioman on the USS Yuma ATF94, pictured left. She was home and a feeder.

"Patriotism is not short, frensied outbursts, but the tranquil and steady dedication of a lifetime".

My father-in-law Sevrved aboard the USS Yuma from May 1944 to Nov 1945 His Military record from the Ships logs show he boarded the ship in New Caledonia.
There were 7 others on the Ship and I have their names as well. My email is maxmuscle3@lear.net