BACK TO THE MOUNTAINS: The ride

I left the church where I camped for the night in high spirits and a lighter trike that was running well. Bring on the mountains.No getting lost this morning. That mountain was like having the proverbal gorilla in the room, couldn't possibly miss it.

The trike climbed the mountains just as advertised. Put it all the way down in the granny gear and it would do a constant four MPH right up the road. I was also up to the climb. I have highly developed legs and had no difficulty making the climb. All looked well. 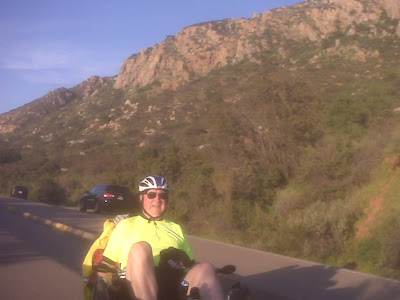 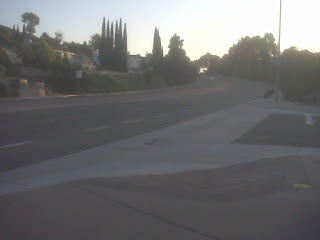 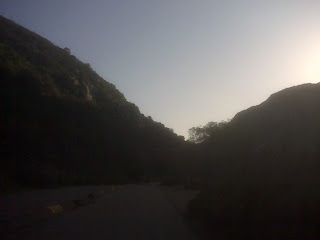 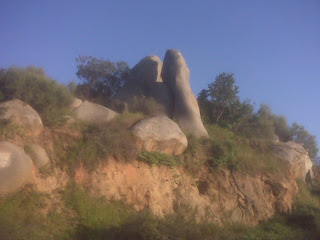 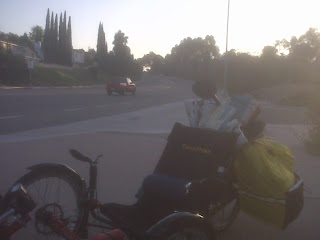 YOU CAN SEE BY THE PICTURES, THE UPHILL GRADE IS NOT THAT STEEP, IT IS JUST CONTINOUSLY UPHILL!.

I HAVE A PROBLEM. The cardiolgist had made it quite clear. When my heart was under stress it's blood output was reduced by 50%. The lack of blood to the brain would result in a stroke. JUST THAT SIMPLE. I couldn't ride with a heart beat over 120. BUT I COULD NOT CLIMB THE MOUNTAIN AND KEEP A HEART BEAT OF UNDER 120!

I tried climbing the mountain like you eat an elphant, one small bite at a time. At home when my heart beat would get at the 80% of maximum level, 120bpm, I simply stop pedaling and coast until the rate decreased. I got down to where I was only riding 50 yards at a time and taking a rest. Didn't help! Fifty yards later I'd be well above 120bpm. I tried taking an hour's rest. Didn't help. When I pedaled just a few moments my bpm would be right back up there.

AT ONE POINT WHEN MY BPM WAS 140, I COULDN'T STOP PEDALING BECAUSE OF THE TRAFFIC. My butt was exposed and I had to keep moving. My bpm went to 148. At this point I realized that to continue the ride was sucidal. I promised Julie and the children I wouldn't do that.

At that point I ended my attempt to do the cross country ride. I had 17 miles of mountain to climb today and 34 miles of mountain to climb tomorrow. Physically I had the strength to make the climb. The trike was performing wonderfully. My heart was not. There are times in life when it becomes necessary to adjust to the absolutes of a situation. I had a lot involved with the ride but becoming a corpse wouldn't help.

The ride back down the mountain was exuberant even in the sadness of the moment. The bike was stable but with the rear end load I kept the speed below 25MPH. Even so, that was like flying and flying. I stopped to let the disc brakes cool. My heart bpm, okay!

I rode all the way back to the motel at San Diego. Didn't get there until 11PM. I rode for some four hours in the dark on the six lane high ways with cars doing 60-70 MPH. I stayed in the bike lane but it was still an experience. The entrance/exit lanes had to be crossed on the fly. No dedicated bike lane there. I just waited until it was clear. Yes, I had my lights on and no I wasn't really at risk. It was different but you get used to it. I was careful.

Passing Sea World in the dark I missed my Midway Street exit and rode a couple miles further. When I got to the Pacific I knew I had gone too far. I rode along the ocean to Point Loma Blvd. where I was in familiar territory and found my way to the motel. I was beat!

Didn't sleep well. At 5:00AM I called Kimberly and explained my situation. She arranged for a flight home and faxed the info to the motel for me. My departure was at 11:15PM. I had an hour layover in Atlanta and got to Akron-Canton at 9:15AM. I had a new book to read and finished it just before the plane landed. Kimberly sure looked good. She was chipper as ever and took me home.

I had taken my trike back to the trike shop and arranged to have it stored for up to six weeks. My first thought was that I'd go home, get the van and return for the trike. I thought I would van the Southern Tier Bike Trail doing all the day rides on an unloaded trike as I crossed the country.

Mark, in his wisdom, advised that I reserve making that decision until I got home and rested awhile. When I mentioned the church obligation I felt to Kimberly she replied that anyone who didn't understand the situation wasn't really a friend. When I got home, after being up all night, I crashed until around 3:00PM. By then I had a very sympathic email from my cousin Cheryl. She understood perfectly. I made the decision to simply go after the trike, come home and enjoy the lakeside retreat for the summer.

My support team had also fulfilled their commitment to me. John posted the only blog I mailed him and informed me he was awaiting the next. The eleven year old who worked so hard will still get her ride in our Lincoln Town Car to a fine steak house. Julie and I agreed on that decision as we enjoyed a great reunion at the Long Horn Steak house in Canton, our favorite.

IRREGARDLESS OF THE RESULTS, I HAD SEEN MY DUTY AND DONE IT.

Grandpa, I am so proud of you! I just wanted you know even though I brag about your accomplishments all the time, I am so glad that you came home. I want my grandpa around for a good while longer to tell Sicily and Violet the wonderful Big Fish stories you told me as a little girl. Love you!