BLOGGED OUT OF SEQUENCE, but I wanted to mention my trip to walmart which I made before I left San Diego. I transferred my meds from CVS where Kathy, a friend works, to walmart as there are walmarts everywhere across the nation.

I was assured repeatedly that all I had to do was give the good folks at the pharmacy anywhere my name and birthdate and they would fill my prescriptions right away. I couldn't get one of my meds filled until I got to the west coast due to insurance time controls. Julie tried to get around those rules but couldn't.

It is a long story but when I asked the beligerent (palistinian?) inn keeper where the nearest walmart was he rudely replied, "don't go there, go to CVS or Walgreens down the block". People who are rude to me are few to non existent. Julie had problems with this guy when she made my reservation. Not to mention that he charged me $80 a night when later another clerk only charged me $70. I explained about needing a prescription filled and (?) his wife told me to go to the trolley stop which was down Midway St. towards the highway overpass. She said to ask someone there.

I'm into talking to strangers. My son Mark is aghast at this tendency of mine. I like people. Pretty young girls or bag ladies, I love them all. The people of San Diego are about as diverse as anywhere I have been. The ones around me on my travels to walmart were mostly hispanic followed very closely by orientals. There were only a few blacks and whites with a sprinkle of the mid east. The personality of the hispanic varied accross the board. The orientals were each and everyone courteous and extremely polite.

When boarding or disembarking from the bus the orientals greeted then thanked the bus driver. Every oriental, young and old, either gender did this unfailingly every time. (I always do this myself even on airplanes). A lot of orientals rode the bus. There were few to no mid east people riding buses. Most people never acknowledged that there was a bus driver.

I didn't understand the signs. I kept asking if this was the trolley stop that went to walmart. There are only three walmarts in this hugh city. No one knew about walmart and were confused by my, I suppose, confused question. 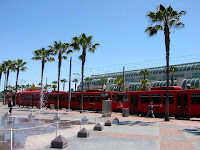 I went into the depot and asked the mid east person who was obviously the manager which conveyance went by a walmart store. In a very abrupt and discourtious manner he told me to "go outside and ask a security person".

Oh, security person, where are you. Eventually I saw a young woman in what looked to be a dark uniform with an ID hanging around her neck. I asked if she was the security person. She burst right out laughing. She told me if a security person saw her they would probably shoot her. She was very friendly and funny. She didn't know about walmart but said to ask a bus driver.

I started to ask a bus driver who was just sitting in a bus. He told me to "WAIT". Guess it was break time. Eventually people got on the bus and I asked him if he went by a walmart store.

His answer was complicated but he did make it clear he didn't and I'd have to do a lot of transfers to get to a walmart and he told me the fare would be $2.45. He said bus drivers did not touch money. Said it was not necessary to have the correct change, however, I could overpay. Ummmm. I thought I looked the part of a local and not of a country bumpkin. Guess not.

I asked another bus driver. He was black. He was also very friendly and knew just where the walmart store was. He said to take bus 44. He also told me the fare was $1.10. The driver on bus 44 knew just where walmart was, it was at the other end of his run all the way across town. I enjoyed the 30-40 minute ride emensely. He let me off at a shopping mall--everything is a shopping mall without end--with a big walmart store.

Ah, a walmart store. The store was absolutely jammed, like at Christmas time. Home again! The clerk in the pharmacy said "sure we can get your prescription transferred and have it filled. Come back tomorrow afternoon". I have had 43 years of in depth, professional experience with such answers. He quickly decided that I should come back in an hour. I did and the prescription was ready. I needed several items from a new trail bible to fuel for my pocket rocket stove. Good old walmart. They had every thing I needed. 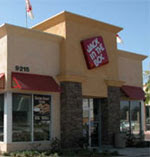 I ate lunch at a JACK-IN-THE-BOX before I took bus 44 home. Sound familiar Donna? Their menu was different from anything in Ohio. Can't say what I had over rice and veggies with chicken but it had a tasty sauce and was good for about $5. Didn't see any snail trails like in Japan.

It was an exciting outing. What a life!