A WONDEROUS EVENT: The blessing of the trike. 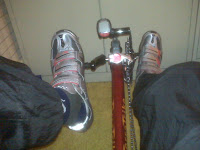 A wonderful, looked forward to event happened today. I had my trike moved out of the office. Oh, happy day! No more pedaling for hours in one spot rewatching old movies. That part of my physical training is behind me. If only the weather would clear so I could get in some outdoor riding. That would be so awesome.

There is still another Sunday before I depart on my cross country, charity trike ride but I will be away to a wedding next weekend. Today was my last Sunday in church. We kicked off our major fund raising effort. It appeared to have got off to a grand start. 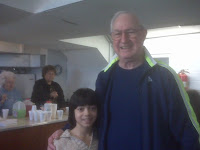 There is an eleven year old in the church who is an outstanding personality even at her young age. She is the lead singer in the jug band and has an adult voice. She lights the candles for the worship service. She is the church sweetheart. Her name is Syndra.

Syndra has already told people that she is going to a fine steak house in a limo in June. As I told the congregation this morning, I wouldn't bet a penny against this little one winning the most pledges contest. At 9:15PM tonight I got a call telling me that her first pledge request was granted with no less than $90. Wonderful! 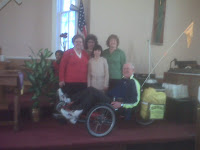 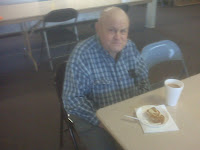 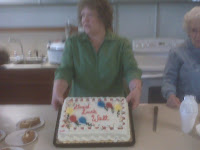 This was a special event of which I am thankful. My "go to" friend, Carla, brought a "Good Luck Walt" cake for a small reception. And there was a special time with one of my oldest friends, Delbert Rausenberg, who was born into this church 80 some years ago. We sit together in Sunday School. I'll miss Delbert.

I tried to address the folks concerns for my welfare. I explained that hundreds, maybe thousands, died in auto accidents in Ohio last year. No one died riding a trike on the Southern Tier Bike Trail. The pastor voiced concern that someone might rob me as I am collecting money on a charity ride. The sign on my trike says "Pedaling for Pennies". I explained that while hundreds were robbed in Ohio last year, no one was robbed riding a trike on the bike trail.

I further asked what robber would rob an old man riding a tricycle, living in a tent and collecting pennies. Got a laugh out of that. I opined that I would probably be safer on the trail than they would be at home and that I'd pray for them if they'd pray for me. They agreed. 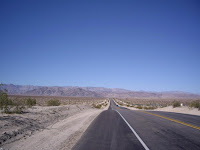 The good Lord willing and the creek don't get too high, two weeks from today I will be pedaling to a motel in Alpine, California. Still got a lot to do but it is coming together quickly. I am so excited that soon sleeping will be a problem!