Visiting London Julie and I had the pleasure of visiting her Majesty"s Royal Palace and Fortress, more commonly know as the Tower of London. The first keep of the fortress, White Tower, was built on the east bank of the Thames by William the Conqueror in 1078.

The history here boggled the mind. Although the tower's primary function was a fortress, a royal palace and a prison, it has also served as a place of execution and torture, an armoury, a treasury, a zoo, the Royal Mint, a public records office, an observatory, and since 1303, the home of the Crown Jewels of the United Kingdom. 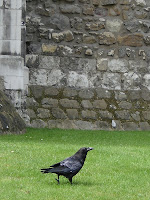 Seeming out of place on the extensive greens are plain old black crows, or ravens, They have been in residence at the towers for centuries. An astronomer convinced King Charels II that if the ravens ever left the Tower of London, the entire kingdom would fall.

Although they are free to roam the grounds, the crow's wings are clipped to keep them from flying away. A Ravenmaster, a Yeoman Warder, is responsible to keep their individual names, gender and age. At the present the oldest crow is an 18 year old male named Gwylum. The oldest crow ever had a name familiar to Americans. He was "Jim Crow" and he lived to be 44.

The "Tower" is well known as a place of execution. Common people were hanged at "Old Bailey" but royalty was beheaded. The beheading of Anne Boleyn, Queen of England, took place in 1536. Although charged with adultery, treason and incest her real crime was to be in the way of her husbands lust for another woman. It is said that the ghost of Anne, with her head under her arm, still haunts the grounds. 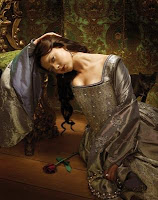 The description of Anne's beheading was grusome. Seems as how, as the axe descended toward her long, graceful neck, she jumped up and bolted for the sanctuary of the church. She was chased by the axeman who just kept hacking away at her.

Sir Walter Raleigh was imprisoned in the Bloody Tower with his wife and two children from 1603 to 1616, 13 years. 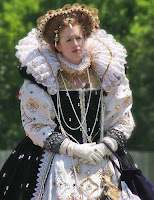 The Crown Jewels of the United Kingdom, such as the official queen's crown below, have been kept at the Tower of London since 1303.They are protected by Beefeaters guards.

The caution given by the beefeaters to visitors viewing the crown jewels include the notice that if the glass of the jewel enclosure is so much as touched, the building will then be AUTOMATICALLY locked down for 24 hours during which time everyone present would be stripped searched.

Although not guarded by the Beefeaters, today Julie and I possessed a treasure more precious to us than the Crown Jewels of the United Kingdom.Julie and I both have had the flu for over a week now, Julie much worse than me. Our jewel tonight has curly hair, a michieveous grin and sparkling eyes. The jewel is named Carla Ludwig, pictured below with a good luck cake for me. 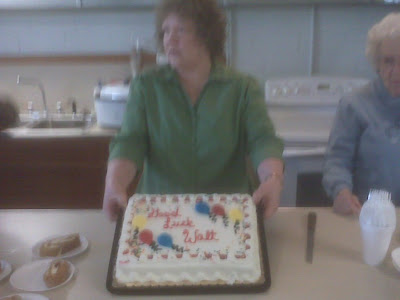 She is my "go to girl" in all of my foolishness, which can be often and much, and she is an up close and personal confident of Julie's.

To encourage her two sick friends Carla brought a pot of steaming hot, homemade, chicken noodle soup and a still-warm loaf of bread she had just baked. 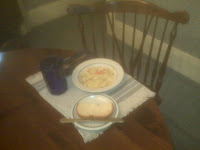 The Crown Jewels of the United Kingdom are priceless. Just as rare and more valuable to us are friends who, like Carla, are beyond price.

We are thankful for all our blessings, including the blessing of friends.

Dear Sir, you are very misinformed as to the description of Anne Boleyn's execution. Here is one link, and there are many, many others about Anne, her life and subsequent execution: http://englishhistory.net/tudor/anne-boleyn-execution/

Thank you for your correction. I simply reported the death as the official guide described the death to my tour group from the site of the beheading.

Actually, your description matches that of the execution of the Countess of Salisbury, 'beheaded' in 1541. Hacked to death is more like it. Here's another link: http://www.findagrave.com/cgi-bin/fg.cgi?page=gr&GRid=18701. Your tour guide may have been talking about the Countess? I hope so or he/she shouldn't be giving tours!

Just one in a group outside where the beheadings took place, I might have misunderstood the name, or mis remembered. Thank you for your imput. Others reading the blog will see your correction. Also, the guide may have just blurred the two events into one. Anyway, thanks!