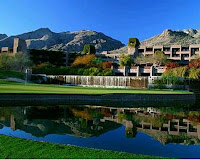 
The latter was a four day meeting at a marvelous lodge. Kimberly had taken the entire lodge for her medical group which came from around the country.

Several days before the medical group came Kimberly flew her husband and two children to Tucson to enjoy the lodge. Not too long ago Jack and Riley, aged 10, flew to Florida. A number of times the family has flown to Cape Cod for a sea side vacation. These two little munchkins go through an airport pulling their luggage on wheels like it is a normal part of one's life. 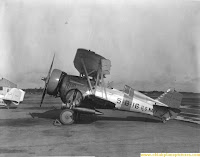 How times have changed. There were airplanes when I was their age. Little planes, mostly biwings, that landed in the field across the railroad tracks from our home.

The pilots would "buzz" the field a few times before landing and everyone in the community would hurriedly make their way to the field to "see" an airplane. For a buck, maybe less, the pilot would take the folks for a short ride. 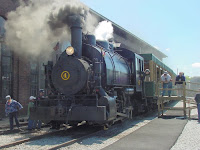 Certain events were almost used to tell the time of day. The "down bound" B&O passenger train, puffing smoke and blowing cinders, passed out house at 4:10PM. Looking at the "rich" people in the dining cars was an important part of our dreams of "some day". The blowing of the trains whistle for the crossing below our house informed everyone that it was almost dinner time.

At 2:00PM everyday the mail plane flew over. Although it happened every day it was still an event for which people watched. That seems so silly today, watching for a little airplane. It was like my brother Henry and I staying up til 10PM on wilderness canoe trips to see the faintly moving star that was a space satellite.

In a recent blog I mentioned that my Grandma Pierce probably never traveled more than a hundred miles from where she was born. You know what, until WWII hardly anyone did. 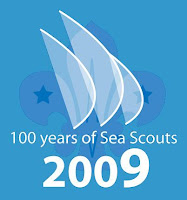 My longest trip was "all the way" to Ashland, KY for a social when I was in the Sea Scouts. That was so cool! I still remember dancing "the last dance" with the senior girl scouts. WooHoo! Ashland is perhaps 65 miles downriver from Point Pleasant, WV.

I also remember walking 8 miles to Flatrock, WV when I was six years old to look for a dog that Dad had probably sold or traded off. I didn't ask anyone and didn't think anything about it. I was missed but the AMBER ALERT was not sounded. HA. Mom simply said that I should let someone know if I ever did that again. 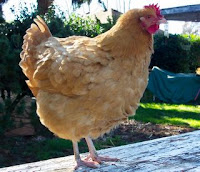 No, I didn't find the dog but Ma. Jones had Junior catch a chicken and cooked me a great dinner before I walked back home. Walking the four mile round trip to town to see a Saturday night movie was taken for granted, if we could somehow find a nickle.

Alongwith my two cousins, Bob & Junior Shirley, when I was still a preteen, I walked 16 miles with them to lead a heffer home from the Shirley's grandmother's in Letart, WV. We never gave it a thought. A neighbor once paid me fifty cents to lead a mean, skittish mule to his farm about 4 miles from town. I was maybe 10 years old. Mom sure gave Pete "what for" for that!

A couple years ago my Step Daughter called to ask me to pick up my grand daughter from the high school one mile from our home. Jackie told me which door of the large building Breanna, whom I call Huckleberry, would exit. I walked to the school and watched football and band practice as I waited.

When Huckleberry came out of the school she was surprised but pleased to see me. We are special buddies. She said "where's the car"? She nearly fainted when I said that I had just walked. She gave me to understand all the way home that she never walked anywhere. She still doesn't. She still gripes from time to time as she recalls having to walk a mile! 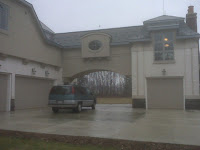 Like most Americans, Julie and I each have our own cars. We think nothing of going any distance to a movie, store or restaurant. 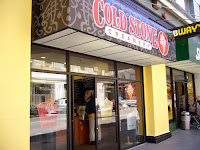 We attend a church and Julie works a 20 minute drive away. I drove 20 minutes yesterday just to be there when Kimberly's children came home from school and then drove them another 20 minutes to an ice cream store for a treat. Tonight Julie is driving about 45 minutes west to take two grandsons to dinner and to see Star Trek.

Our lakeside retreat is an hour and fifteen minute drive from home. It is located six miles on an isolated road. Although I mostly stay put when I'm there, if I want anything, like someone else to fix my breakfast--this happens often--it is a six mile drive. I think nothing of this. I get my water each week from Mark's 18 miles away.

Times have so changed in my lifetime.

Americans life styles are so mobile. We have just become so acustomed to personal, high speed transportation that we somehow never give it a thought. When most people in my neighborhood didn't even have a car when I was a child I am puzzled that a high school youngster today "never walks"?

Last night I read an analyst's opinion about what he considered the probabilty of the country going into deflation resulting in another great depression. There are always doom sayers, huh? But that trend of thought took me back to how things were in my early life.

What a shock it would be to Americans, who like Riley and Rosebud, think a cross country trip is a normal way of life and walking is out of the question. 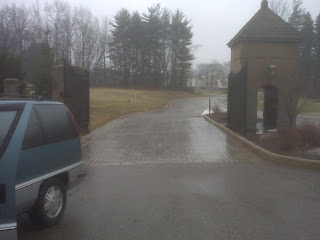 The gate where the kids get off the private van that transports them to and from school is maybe a hundred yards or so from home. You can see their (white) home in this picture. If the weather is cold or foul Kimberly drives down to the gate to bring them home. Think of that!

Nothing really. Thats just something I muse about as I prepare driving to the Cracker Barrel to enjoy their Friday fish special. HA

".......young men shall see visions, and your old men shall dream dreams"