NEW, DIFFERENT OR EXCITING? Sure different!

About 25 years, or so, ago I hauled four trees home from the nursery in the back seat of a Volkswagen Doodle Bug. As my Mother, may she rest in peace, rode in the front passenger seat, Julie rode "shotgun" in the back seat with the four trees. Yes, she was just a little thing then and had no trouble. 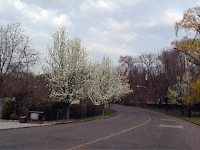 The flowering pear by the garage was storm damaged. A then neighbor's live in boy friend worked for a tree coupany and told Julie he would remove the three trees in the back of the house and cut back and shape the one in front for $100.

The damaged pear needed to go and the two crab apples had a scales desease. Julie wanted them all gone.

I told the guy that $100 wasn't a fair price and I'd pay him $400 which I thought would be more honest on my part. He immediately took down one of the crab trees, got me to help cut down the damaged pear.

A couple days later he asked if I could pay him part of the money so he could get his chain saw repaired and finish the job. I told him no sweat! I would just pay him the entire $400. BAD MISTAKE! He split with his girlfriend, moved out with my money and I never saw him again. His name was Jay. I had to pay two guys to haul the dead trees away.

The girl friend felt badly and got her brother to cut down the other small crab apple which he hauled away and would take no pay. He was afraid to tackle the large pear tree in front as it was crowded between two houses with a lot or electrical wiring through it. There are good people in the world.

One of the good people is named Ronald Wagner. Ron works for the Hazardous Tree Experts of Barberton. His sister Donna lives next door. Donna has helped Julie with the yard during my current illness.

We asked that Ron just cut the tree back but he pointed out dead leaves all over the tree and told us it was dying from a disease that sounded like "Like 'Em". He felt the tree would be totally dead by fall. He agreed to take the tree down for a reasonable fee. I increased his fee a bit and asked him to trim up the big maple tree also. 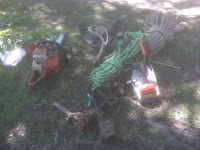 He came at 1:45PM and left at 5:45PM. He laid out his equipment. He then trimmed the big maple tree with a lopper.

Now, I have a lopper. Trust me, I couldn't begin to lop tree limbs the size that Ron lopped so easily. I might add that his helper, Albert--a younger brother--couldn't either. 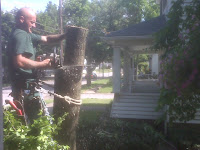 I should add that Ron is not a big man. Probably no more that 5" 6". Not an ounce of fat on him. He shaves his head. It's never the size of the dog in the fight but the size of the fight in the dog. Ron Wagner is all man! Far more important, he was most cordial also, a very pleasant talking man.

Then Ron donned his climbing gear and "walked" right up that tree. In four hours he only came down once for a few minutes to get a drink. In addition to his brother Albert, his father--also Albert--worked on the ground. Ron kept them both busy cutting up the big limbs and loading them into the truck. 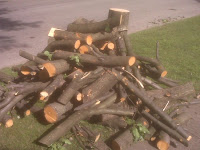 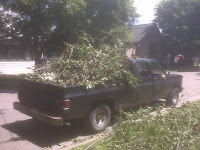 At one point brother Albert told Ron that the truck was full and inquired if he should go dump it?The answer was "Nah! That trucks not full. Tamp it down". Ron was right. The trunk and big limbs were piled into a pile and hauled away last. 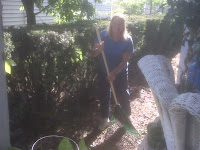 Extreme care was taken not to do any damage. The yard was carefully raked. After the three men finished, Ron's wife, Sue, a delightful lady, raked the yard some more. 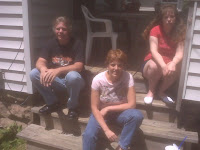 The entire Wagner family was represented. In addition to the father, Albert, the son Albert, and Ron and his wife, Donna's twin brother Donald showed up for awhile to visit. Several people in the neighborhood watched as the tree came down.

The dad is truly a craftsman. A couple years younger than me, he has been a high steel worker building some of Akron's skyscrapers. He builds Dulcimers. Donna showed me a picture of one unusual dulcimer her dad had built. Beautiful. The younger son, Albert, is a $30/hour steel worker also. 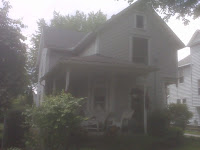 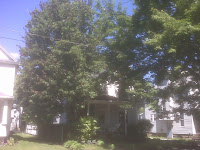 WHAT A CHANGE SITTING ON OUR FRONT PORCH! What a difference in the amount of sun the flowers now get. I told Julie I felt "exposed" and she said she'd hang some bamboo blinds for me. 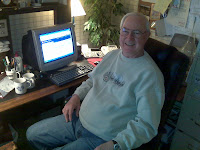 You know, I'm aware that I am older than dirt. My grandson, Riley, tells me so. Now, I'm even older than the trees. Wow! You know what? I just got a total clearance from my doctor to go back to the good life with gusto, starting slowly, of course.

We now know that my heart is really a good heart with no blockages. My vital signs are very good. I'm off the beta blocker and my pulse is back to normal. I feel great!

DO I HAVE WORDS OF WISDOM FOR YOU TODAY? I DO, I DO!