IT'S MINE: My Grandpa Made It Just For Me! 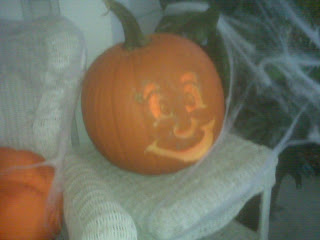 Those were Rosebud's, (Delanie Rose Pierce Boggs), exact words about the Jack-O-Lantern that her Grandpa carved for her. 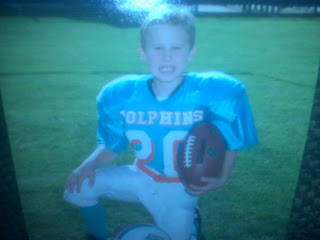 I made a pumpkin pie with a crusty pumpkin in the center of the pie for Riley. Being the kind and thoughtful young man that he is at age 11, I know he cheerfully shared it with the family.

But, a pumpkin pie is one thing and a personally carved Jack-o-Lantern is another.

I took the gifts out the week or so before Halloween. That was four weeks ago. That carved up pumpkin has to be getting pretty soft by now. Another week or so and it will be slime. Pure slime. Slime that cannot be picked up. 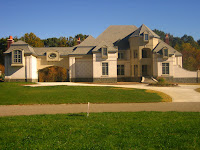 Not wanting their new home to be slimed, my son-in-law, Jack, discarded the pumpkin out in the woods. Now, Jack is "the" original" naturalist. He is working on his Masters in Wetlands from Duke. He understood that when slimed that pumpkin would blend right into the soil.

The rear of their property extends out into a woods. The woods are over a steep hill from their home. He has underplanted the big trees with small plants and professionally lighted the woods. The results of the underlighted trees in the fall are beautiful and will become even more spectacular in a snow fall. The pumpkin would never be noticed. Right?

Well, not quite true! Rosebud noticed it evidently.

The family was outside and Kimberly noticed that Rosebud wasn't with them. Then she noticed Rosebud climbing that steep hill lugging that big, carved and soft pumpkin. Climb three steps to roll and slide back two. Kimberly didn't say anything but cleared the way for Rosebud to top the hill unobserved, so Rosebud thought.

Directly she heard Rosebud coming into the house. She heard Rosebud going up the rear steps to the upper floors. Kimberly called out "what are you doing, Lanie" to which she received the ALERT answer for which all mothers listen. "NOTHING" was Rosebud's reply.

Kimberly checked and, just as she thought, there was Rosebud, covered with leaves and twigs and a fair amount of plain old dirt, arms around that Jack-o-Lantern, climbing the steps, heading towards her lovely bed room, pumpkin, dirt and all! 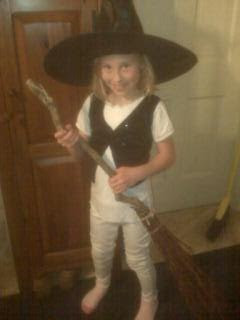 How do you explain to an eight-year-old that even cherished belongings sometimes have to go? Kimberly has a Masters Degree in Family Counseling and I bet she was pushed for the correct answer.

And, Grandpa? Can't wait til next Halloween, the good Lord willing and the krick don't rise.

Do I write a lot about these two little munchkins? Yes, I do.

I have a lot of other grandchildren and love them all dearly, as they do me. I clearly remember carving Jack-O-Lanterns for Jenny, the oldest grandchild. But, they are all grown up now, some with kids of their own. These are my last two little ones and they bring great joy to me. They are each one sooooo special!

Gene Perret:
"An hour with your grandchildren can make you feel young again. Anything longer than that, and you start to age quickly"

Awww...Poor Rosebud! (sniff...sniff) Heck, I'm 52 and I still think there is no explanation for treasured things having to go eventually. Thank God for pictures!

Beautifully and poignantly stated. Lainie will be thrilled to see this when she gets home from school today. However, I will now have to deal with her being reminded that "her" pumpkin is becoming composte as we speak. hahahahahahaha! Love you, Dad.

Haha, I loved this post! I always have a hard time throwing away my jack-o-lanterns as well. I feel for you Delaney.