It's not the destination, its the journey! This is so true, whether we are speaking of an event or about life it's self. Sadly, I know that to the vast majority of the folk, this is an unknown truth.

Since my earliest years I have lived in ANTICIPATION of three lists of goals; a short term goal, a year or less; an intermediate term goal, the next five years and a life time goal, some time in my life. 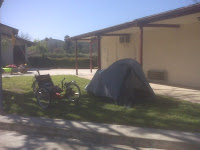 The results of this planning has been an exciting life of travel, adventure, fellowship and service to others. This picture is of a camp site on an attempted cross-USA bike trip at age 78. I mean, how exciting is that?

The most cited reason people have for not enjoying my life style is lack of money. "It must be nice" is the comment we hear often after a trip to Ireland or a month at the beach.

The cost of such plans, with 12 or more months of saving, is usually less than the price of a pack of cigarettes a day, something even the poorest seem able to afford. The secret is to plan far enough in advance. All that time creates a wonderful ANTICIPATION.

Julie and I have firm plans for a Med Cruise and a trip to Italy for our 30th Wedding Anniversary in 2011. Want to go along? Just make arrangements for someone to take care of the dog and start saving your pesos. It can be less expensive than you'd expect. Twelve-fifteen months of ANTICIPATION. I can get so excited just thinking about it that I can't sleep! What excitement is keeping you awake at night?

Following my early retirement at age 60 I have tried to fullfill my life time goals. I will never get them all in. Life can be so exciting if we allow ourselves to do whatever we want to do disregarding money or opportunity.

One of the many traits that I have passed along to my children is the ability to set goals, not pie-in-the-sky dreams but something that we would really expect to do. Uh, dreams are okay too! 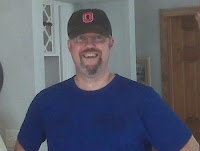 My eldest child, Mark, was once sent to a goal setting seminar. The exercise was to list all the things they would like to do in their life in five minutes. In a moment or two Mark asked for another sheet of paper. The seminar leader said "turn it over and write on the other side". Mark replied that he had already filled in both sides, he wanted more paper. How do you measure the success in your life? This was a measuring moment for me.

I print out my plans for my upcoming year. One year I asked a niece, Sherry Ann, if she and hers would like to spend a week as our guest in Myrtle Beach next year in October, giving her the date. I followed up by sending her my plans for the upcoming year, which included her visit.

My wife, Julie, and I will be involved in seven dinners by the middle of January. Five of those dinners will be at our home. To allow our guests to ANTICIPATE the event in advance, thereby enhancing the experience, we mail the plans for the evening in advance. In times past we have seen plans such as these on our friends fridge long after the event. 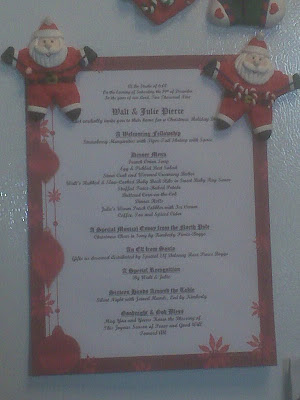 "At the Stroke of 6:00, On the Evening of Saturday the 19th of December, In the year of our Lord, Two Thousand Nine" so headed the dinner plans sent to three couples . They will have already received our plans and can now ANTICIPATE the good times in store for them next Saturday evening.

There will be a Welcoming Fellowship with Strawberry Margaritas with Tiger-Tail Shrimp with Sauce. The following menu is printed out: French Onion Soup and an Egg & Pickled Beet Salad followed by an entre of Snow Crab & Baby Back Ribs, a Stuffed Twice Baked Potato and Corn-on-the-Cob. The dessert will be Peach Cobbler, still warm from the oven, with an Ice Cream Topping. 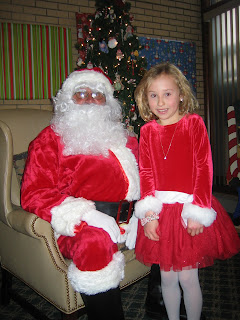 There will be Music from the North Pole, a gifted singer singing Christmas songs, and nothing less than a Santa's Elf, my seven year old granddaughter, Rosebud, passing out gifts "as deserved". Can any one say lumps of coal?

The dinner will end with Sixteen Hands Around The Table, joined hands singing Silent Night led by the special singer and a blessing.

That really sounds awesome! I know it will be a good time. No doubt in my mind. Somehow I think that where you are...good times are not far behind.