A WISE SAYING: About Things Thrown Away

When I was a child in Point Pleasant, WV we had an old black man by the name of Jenk Barnett. His home was at the end of the street by what we then called "THE LIGHT PLANT". The new electric company was then thought of as a "light" company, as in electric lights vs kerosene lamps. No, we did not have electricity nor did any of our neighbors.

I HEARD THAT SNICKER ABOUT THERE BEING NOTHING WRONG WITH MY MEMORY IF I CAN STILL REMEMBER BEING A CHILD, Riley's comments about me being older than dirt not withstanding!

Anyhoo, Mr. Barnett's property was literally covered with every thing you can imagine, a broken chair, a cracked pot, a buggy wheel, an oil lamp without the wick holder, you name it, he had it. When asked about all the, shall I say junk, around his home he would reply that "WHAT ONE HALF OF THE WORLD THROWS AWAY, THE OTHER HALF CAN LIVE ON". I don't know but what he is right.

We have a television in every room of our home, sans the bath room. We have a TV in my home office and TVs in the bedrooms. These are all big TVs.

Twenty years or so ago, we had Ethan Allen decorate our home with all new furnishings, including an entertainment center. In the middle of this center was an opening for a the largest TV of the day, maybe a 19" model. The TV set on a swivel platform that would project out on rollers so as to be seen from anywhere in the room.

When we were given the current TV that is in our living room, maybe a 25" model, I had to remove everything from the center's TV holder. The new "big" TV barely squeezed into the stripped opening. 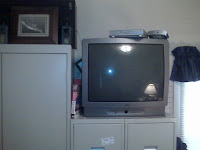 Today, everyone is moving to the new "THIN TVs". My daughter, Kimberly, and her husband, Jack, gave us their 35" TV when they made that move. That TV replaced a small TV in our bedroom. Prior to that they had given us a 30" TV which we put in my home office.

Jack's brother, Tom Boggs, upgraded to a THIN TV and was about to pitch his older 35" TV. Kimberly and Jack were quick to tell him that I'd probably want it. Tommy agreed to trade it to me for one of my apple pies. DEAL!

We have some wonderful, younger neighbors who are going through financial challenges. The husband is laid off after 20 plus years with the same employer. Benny and Donna each have their own TVs but they are very small, older models. They were very pleased when we told them they could have the 30" from my office, the location of the new 35" model.

Yesterday Jack brought the new 35" TV. It was a giant of a TV, just like the one in the bed room which FOUR, BIG, STRONG,YOUNG MEN STRUGGLED to carry up the stairs. Since rupturing discs twice, I should no longer carry heavy objects. I asked the young man who is to receive our replaced TV if he would help Jack carry the TV into the house until Julie could arrange to have it also carried up the stairs. (Thankfully, Julie handles all the heavy lifting in my life!) Benny agreed.

My son-in-law Jack was able to carry his half the TV alright. Benny, however, collasped going up the front steps with the big TV on top of him. He was pinned. Not having much choice, I picked the TV up off Benny and carried it across the porch and into the house. I am not at all sure that I didn't rupture another disc. I sure am hurting. 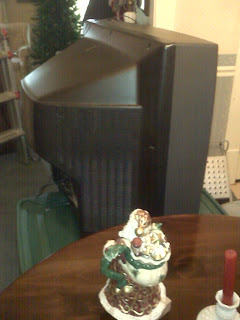 The TV couldn't have come at a worse time, although my wife, Julie, who is a TValholic, couldn't wait to get it. Julie, with help, has been putting up Christmas decorations for a week. She may be half done. The new TV is now setting among all the clutter of Christmas decorations. WOE IS ME! 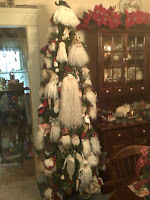 Julie loves to decorate for the season, whatever it may be. But Christmas is her favorite. She does a wonderful job, WHICH IS ANOTHER BLOG. She has a huge Santa Claus collection, part of which is displayed on a tree dedicated to just Santa heads. The tree has been aptly dubbed THE DEAD HEAD TREE. 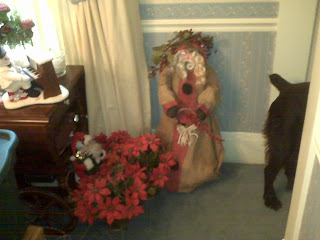 Last year I made a contribution to Julie's santa collection with what I called an "OBAMA SANTA". It was a santa dressed in sack cloth, which is in keeping with where I think the President is leading our nation with his "Robin Hood" type of government.

The black butt in the picture? That's the tail end of my Giant Schnauzer going up the stairs. Getting Gunner is one of the steps I took in preparation for what I fear may be an "OBAMA WINTER".

At this point in the conversation I always like to disclaim, recalling that I took a solemn oath to defend the President of the United States against all Enemies, foreign or domestic. I'll honor that pledge but can't wait for the next election! RUN, SARAH, RUN!

From the front entry and throughout the house, Julie, with the help of neighbor Donna and granddaugher, Huckleberry, is doing a wonderful job of preparing for the many dinners and parties we shall enjoy over the Christmas Season. 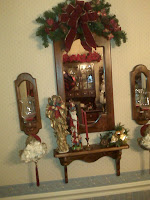 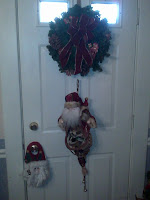 Remember, WHAT ONE HALF OF THE WORLD THROWS AWAY, THE OTHER HALF CAN LIVE ON.

I don't know what Tom paid for his new, thin TV but at one apple pie, the price was right on this one.

Are you one who throws away or one who gathers in? Neither are right or wrong, better or worse. By my very nature, like my Mother before me, I'm a gatherer. Would you believe that even this computer is a "pass along"? My van, which is my all time favorite vehicle, is a "pass along" as was my truck before it. Even my 3-year-old Giant Schnauzer is a "pass along".

TO THE HALF THAT THROWS AWAY, WE, THE HALF WHO RECEIVES, THANK YOU! I like free!