WRITE IT DOWN: Nah, I'll remember!

The elderly lady turned to her loving husband, as she watched TV, and declared that "she was hungry". Always eager to be of service, as all husbands around the world are, he asked his bride of many years for what she was hungry.

She decided she wanted some ice cream. She also decided that she wanted the vanilla, not the chocolate or strawberry. She told her husband, telling him also to WRITE IT DOWN so he wouldn't forget.

Confidently, the husband declared he wouldn't forget but the wife insisted that he write it down because he would forget. NAH, I'LL REMEMBER! He headed for the kitchen.

He was gone, and gone, and gone and gone. After a very long time he returned. He returned with a plate of SCRAMBLED EGGS, SAUSAGE & TOAST. Indignantly, the wife said in a loud voice, I told you to write it down, I knew you'd forget.

In a voice saddened by many years of forgetfulness, the husband inquired "What did I forget now". In a superior voice the wife declared, I TOLD YOU I WANTED BACON, NOT SAUSAGE.

Good old Ben Franklin declared in his Poore Richard's Almanac that The Weakest ink was stronger than the strongest memory. Old Ben was a wise man. 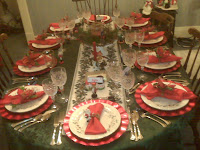 Yesterday evening Julie and I had still another holiday dinner. It was a gala affair. The table was set with care, full of color and the reflection of silver and crystal with candles burning brightly throughout.

As is ever the case, all the girls were good and got presents and all the guys, the writer excepted of course, were bad and got lumps of coal.

We had eight guests and set a gala table for ten. Yes, it was crowded. Usually for 10 we would sit six in the dining room and four in the kitchen. But, it was a family affair, with the Ludwig's included, and I wanted everyone together. Sometimes, being a bit crowded adds to the fun, huh?

A recent blog of mine came up in conversation. Gleefully, the kids told Julie and I that we had been married for THIRTY years, not TWENTY NINE as I had written in a recent blog. Lots of bawdy comments were made and everyone had a good laugh. It appeared the joke was on the hosts.

I explained that it could not be the our 30th because for our 30th I was taking Julie on a Med Cruise to Italy and Greece. Chuckling, Mark asked "have you bought the tickets yet?"

It was a delightful evening, entertained by two precious children and a new Havanese puppy, who slept soundly on Mary Kay's lap as Mark and Kimberly looked on.

When everyone was gone, Julie asked "Have we been married 30 years"? I forgot it but she did not. Again this evening she brought up the subject--I believe she was thinking of that warm, Med cruise to the land of her forefathers, Greece.

Quietly, I sneaked up to the office and got the marriage license out of the lock box. Although my memory was not a tower of strength, the ink had not weakened one iota. Clearly, in Rev. Browning's handwriting, was January 5, 1980. Uh, that's right, 1980--thirty years ago. 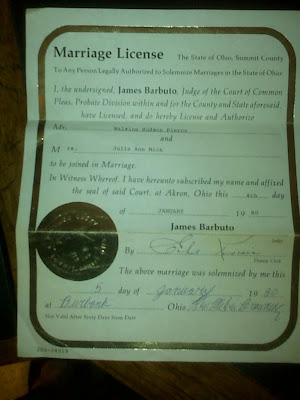 Lordy, Lordy! Wish I was Forty.

As strong as the ink will be my kid's memory. They will never forget, nor will they let me forget, this error. Me, Walt Pierce, paragon of strength and forebearance, meek, lowly and humble, sweet gentle and kind, I forgot my own wedding date. 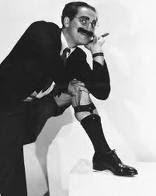 As Grocho Marx used to say "HOW HUMILATING".

Can I get you some ice cream? "I'll write it down!

Hahahahaha. Oh, Dad: if it's any comfort, Jack and I weren't sure how many years we should celebrate on Dec. 28th. Turns out I was right (of course) and that we had been married 18 years. Imagine what Ri and Rosebud will correct on our feeble behalf?!? Hahahahaha

Don't worry about it Dad. The important thing is not the number of years, but the fact that you are still together in a loving relationship. Tracking time in man's invention. Enjoying the time... that's a God thing! We so enjoyed the evening. Love you! Mark