OOPS! Someone out there knows the truth!

Sure, and 'tis a grand day! Me lovely wife, Julie, has just fed me corned beef and cabbage along with parsley potatoes and Irish soda bread, all washed down with a cup of strong, black Barry's tea, from Ireland. Am I feeling full of Balarney? And, why would today be any different?

No, it isn't St. Paddy's Day yet but, like in dessert, life is short, why wait? (Also Julie had the time yesterday evening to cook)

Sure and a grand day t'was until I received my latest email from California.

All the way back to July 20, 1930 wasn't the Good Lord looking out for me welfare? Sure, and He was. And, how, now you might be asking? He allowed to be born into the world a little girl to the Blankinship family, uh, that's Blankinship with an "in" and not an "en". Don't ask why, but it is important, or so I've had it explained to me! They named the little babe MAUDE.

The name MAUDE /Ma (u) - de/ is a varient of MADELINE (Hebrew), MATILDA (Old German), or MAUD (French). The meaning of the name Maude is "Woman from Magdalia; Mighty in Battle". This babe must have been French because she would be quick to let you know her name is pronounced MAUD and not MAUD-EE.

As I was not to make my appearance in the world until nine months later, how was Maude's birth God's plan for me, you might be uh 'askin? Well, now, would you believe that Maude only lived in Point Pleasant, WV, my home town, for one year. And, what year would that be? Why, my senior year in High School, a school well known for the Senior English teacher, Miss Mary.

Miss Mary McColloch, I think, was 80 years of age. Her eye sight was not what it once was and she spoke with a faltering voice. She was a great teacher from a well known, pioneering family.

I have been blessed my entire life by her requirement that students memorize the 121st Psalm. She also introduced me to poetry, which has become an important part of my life. Miss Mary explained Henry Wadsworth Longfellow's The Rainy Day, which I once recited to visitors at Longfellow's Home and Museum in Portland, Maine.

Miss Mary not only required her students to write book reports but to also stand before the class and read the report aloud. The Good Lord, knowing well ahead of time what a lazy student I would be, provided Maude to write my book reports for me. Thank you Lord, thank you!

Maude would give her book report, make me a copy, which I would rewrite, read aloud and hand in, the exact, same report. Did Miss Mary know what was going on? Her eye sight may have failed her and her voice faltered, but Miss Mary was no dummy! Of course she knew as did the entire class. Like all the teachers, she also knew that I lived by myself and came to school on my own--another story. All the teachers cut me a lot of slack. Incidentally, Maude said she never knew that I lived alone.

Maude likes to recall when I rewrote and read her report on Florence Nightingale, the Angel of the Crimea. The entire class laughed, when, in her faltering voice, Miss Mary asked "Walsine, do you really like that kind of book?" It was obviously a girl's book and, being a big, down and dirty football tackle, I did not have any female tendencies. Well, I may have had a strong tendency towards females, Still do. HA!

I assured Miss Mary that I thought it was a lovely book, asking how anyone could not love such a person as Florence Nightingale? The laughter became explosive with Miss Mary joining in.

YOU KNOW WHAT ELSE MAUDE RECALLS ABOUT THAT BOOK REPORT? Now, I cannot say this is the gospel truth but Maude claims to this day that Miss Mary gave her a "B" for the report and gave me an "A+". What can I say? Must have been in the oral delivery, me being of Irish descent and all. Of course, it may also have been that Miss Mary thought that Maude was using MY BOOK REPORT, un huh, with me being of such upright character and all? UMMM

DOES THIS BLOG HAVE A HAPPY ENDING? I can't say as how it does. Why not, you might be uh 'askin. Today I am a well respected man in my community, a community that mostly believes me to have always been the THE MEEK, LOWLY AND HUMBLE, SWEET, GENTLE AND KIND person I keep assuring them I have always been. Good Looking, too! The problem? Maude knows better.

Responding to my recent blog, DOWN MEMORY LANE, Maude commented upon the above claim which I wrote in that blog. Maude says "You were NEVER, (her cap and bold), meek, lowly,sweet humble, maybe a wee bit gentle, kind you were and so so in being cute. You had your smile going for you. Modest, No!" 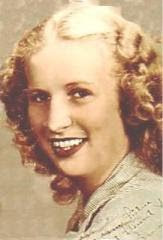 All I can say in my defense is that in her youth Maude, who WAS cute, as can be seen in this class picture, was not always a good judge of character. No, I am not speaking of her giving me her book reports and collaborating against Miss Mary. I'm speaking of whom she chose to marry. Would you believe she married a JAR HEAD? No, No, say it isn't true.

I met Wendell, Maude's husband, at a high school class reunion and he seemed nice enough. Gotta be careful, though, because once a marine always a marine. I'm safe as I won't be on any Navy rifle ranges any time soon, and thats for sure.

I have been invited to Maude's 80th birthday party. I'll do my best to present myself in person, meek lowly and humble, sweet, gentle and kind. Uh, still good looking! What can I say?

Dad, how wonderful! I'm so glad you have heard from her and that you'll be going to the birthday party. Can't wait for that blog! And just so you know, Maude's not the only one who knows the truth! Ha! Mark