This morning my son, Mark, and I met at a Bob Evans half way, or there abouts, between his home and mine for breakfast. He had asked me a number of times lately to meet him for breakfast and each time I was already engaged. Yesterday I called him and, at last, we got together.

We chatted about a wide range of subjects, one of which was why I hadn't been blogging recently. Mark asked if it was because of the dinner for twelve Julie and I hosted last weekend. I assured him that was the reason.

It all started when I found a great buy on lobster at Sam's Club. Normally we pay anywhere from $24 to $28 for two lobsters. They had them two for only $16 to $17. I bought six lobsters and told Julie we were going to have a big sea food bash.

We first intended to invite the Wilsons and the Ludwigs, good friends and lobster lovers, but I let it get out of hand. I GET CARRIED AWAY! Before I over came my diahrea-of-the-mouth I had invited five couples.

We frequently feed sixteen, or more, at formal dinners, in our home. We can serve ten comfortably at the dining room table and six at the kitchen table. I didn't want to do that. This was going to be the most informal, eat with your fingers, dinner. We didn't even use dinner plates, we gave every one a large platter. The table was covered with sea shells and with a bucket, wrapped in a mini hulu skirt, for shucked shells in the middle of the table. 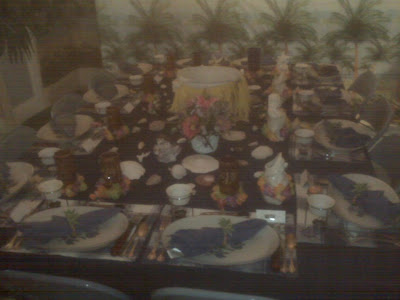 And, I wanted to feed everyone at the same table. We made the dining room table as small as possible, moved it into the living room for hors o'deuvres, and in the dining room set up two long folding tables, side-to-side, alongwith folding chairs.

Problem! We have scads of table cloths but none large enough for these two tables side-by-side. Kohl's has been running give away ads for weeks but when we went to buy a big table cloth the best we could do was a 30% discount. BOO! This was just the start of a financial boondoggle.

I went back for the additional lobsters. Yes, they had lots of lobsters. All for the orginal high prices. I groaned as I paid for six more.

Then I thought, and I have only myself to blame, why stop with lobster. People also love snow crab which Sam sells by the case. Yep, another $48 and change.

By this time I had already bit the bullet so I decided to go all out and have a sea food buffet. To the lobster and crab we added shrimp, clams, scallops and mussels. There was also seafood salad, baked potato, an Asian stir fry with chicken and cole slaw.

I do not know how many Luau's Julie and I have had for the folks over the years but it is lots and at times we have had large numbers to whom we also served baby backed ribs. We do a lot of theme parties and have accumulated decorations for about anything you can imagine. We have hundreds of leis for example. It only took a part of our "luau store" to decorate two rooms. 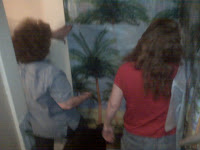 To make a long story short, we moved the furniture out of the living and dining rooms. Julie and Donna, a wonderful lady who works for us, decorated the rooms from the walls in with an island setting. We made the living room into a dimly lighted Head Hunters Lounge. 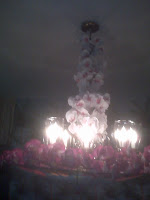 The girls attached a colorful, oriental unbrella, upside down, to the over head light and deocorated the entire light with the most beautiful flowers. The house, inside and out, was a mass of flowers just like in Hawaii. 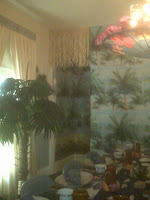 I built a stage at the bottom of the stairs, with sound and lighting, for a stage performance. Click on the picture for a close up look. I didn't actually install the raised stage until the day of the dinner because of our going up and down the stairs. HA 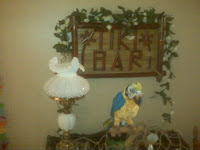 When the people came at 6:00PM we ushered them into the "lounge" to pupu platters of bacon wrapped water chestnuts, bacon wrapped scallops and chicken/fruit skewer hors d'oeuvres. The shrieks of laughter during the 45 minutes of "happy hour" could have come from Julie's Pina Coladas or Bahama Mamas. (Altogether during the evening, the 12 people, actually 11 as I didn't drink any, consummed 2 gallons of pina colada and a gallon of bahama mamas). 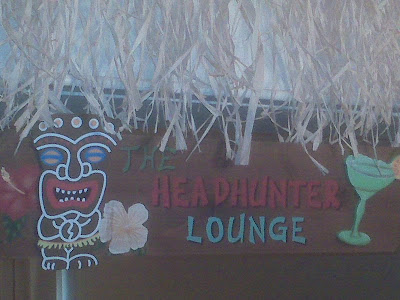 When we seated them in the dining room, the light in the room dimmed as I described the sun set ritual at the Sheraton Maui, the warrior running out on the crest of the old lava flow carrying a lighted torch and a conch shell. Just as the sun disappears, and it gets dark, the warrior blows the conch shell to the four winds and does a swan dive off the cliff.

We matched the sun setting in the story with the light in the room getting darker and darker until it was dark when the warrior dived. In the quiet darkness, I described how the tide sounded as it roared in on Kanapala Beach at high tide, with full sound effects. When ears were about to burst from the sound, it ended at what we described as the quiet and magic moment when high tide is reached.

Then, in a sudden burst of stage light, on the small stage at the bottom of the stairs, in a blue sarong, was a beautiful Hawaiian Princess bringing island greetings. (My grand daughter Christy Anne). She sang several stiring island songs to great applause.

After the entertainment the buffet commenced with Julie and Donna serving lobster and crab directly from the pot. Dinner ended with dessert and coffee, after which everyone returned to the "lounge" for a couple hours of fellowship.

It was a great party. Now, if we can just get the house back together in this lifetime and Julie and I can get over the aches and pains. HA

Oh, yes, Brother, can you spare a dime?

We did not get pictures of the actual buffet--too busy!

Dad - the Luau was so much fun. And the lobster was worth every penny. In fact, I'd say I really got my money's worth on this particular evening! Thanks again. We really had a good time. Love, Mark

I'm just sorry I missed that one!