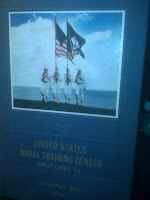 Julie walked into the office with a small, blue book. She said are you in this book? It was the 1948 Class Book of Company 291, Great Lakes U.S. Naval Training Station. Sure, I said. I'm right where you'd expect me to be, at the top, extreme right. Where else? I haven't changed since the day I was born which will soon be 79 years ago. Uh, yes, even then I was Meek, Lowly and Humble, Sweet, Gentle and Kind. Good Looking, too! What can I say? 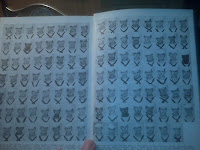 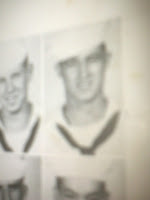 From all around the nation, from every walk of life, young men showed up at the main gate at the Great Lakes U. S. Naval Training Station. It was July 23, 1948. Long time ago, huh? How long? Check out the "new" automobiles coming out of the gate. 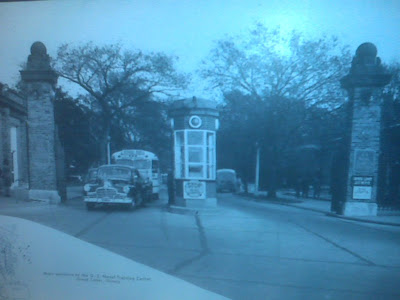 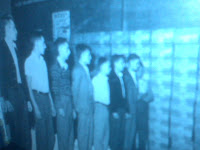 The very first stop was to a room full of relatively small boxes. We had to strip and put all our possessions into the box which we had addressed home. If it didn't fit in the box it fit in the trash can.

The guys came dressed differently with a wide range of possessions. Some were well dressed and had good looking suitcases, some, like me, came empty handed. Naked in the box room no one had anything, no one was rich, no one was poor. We were issued dog tags. Mine read Pierce, WH, 930-16-10, O, P, (blood type O, Protestant). I still have one of the two tags. From there we went to the barber where we all had our heads shaved making us official skin heads. 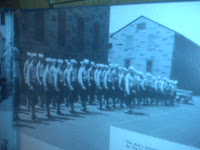 After an extensive physical examination, we dressed in our newly issued uniforms and laced up our leggings, which we would wear for the next three months. With our sea bags on our shoulders we marched a couple miles to the barracks which would be our new home. We then fell out onto the "grinder" as Company 291. Where ever we went we marched as a company with a rifle on our shoulder. Well, sometimes the rifle was actually over our heads, held out in front, to the side or you name it. That nine pound rifle sure got heavy after awhile.

We may all have looked uniformly alike but we were sure different. The seven tallest guys were made boot petty officers. Hooray for my 6' 2". I was made the squad leader of the sixth squad of the second platoon. That little crow and stripe they gave me saved me from a lot of work and standing of trash can watches--I still have it, I mean, you never know. HA I was actually only a Seaman Apprentice, and barely 17 years of age, but I was in charge of 16 other men. (I would be in charge of others until the day I retired at age 60).

Most importantly, I was in great physical shape from football and boxing. Soft, overweight men were sorely stressed. My Dad had already indoctrinated me in discipline. The drill instructors had nothing on Dad. I also thought the food was great and you could have as much as you wanted, and I wanted a lot. I had never had so many new clothes. Would you believe, I actually had three, MAKE THAT THREE, pairs of shoes for the first time in my life. Unlike my fellow boots, I actually enjoyed boot camp. Some of the fellows from a more gentle background were indeed terrorized, losing a lot of weight. I gained weight!

We were issued a nine pound, Springfield 03 rifle, which we were allowed to put down only to eat or sleep. Well, actually, guys who had difficulty with gun drills got to sleep with their rifles. Otherwise, we lived with that "piece" for three months. Heaven help you if you called that rifle a gun. You were made to Duck Waddle with that rifle over your head repeating "This is my rifle, this is my gun" until you literally dropped. 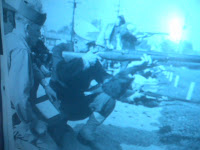 We learned to shoot a 5" gun, a rifle, and a .45 automatic. I had been shooting guns since age 5 and did alright. What I really learned on the rifle range, however, was to hate JARHEADS, the Marine Instructors. They were brutal. I never again fired a gun in the Navy or spoke kindly about a jarhead. 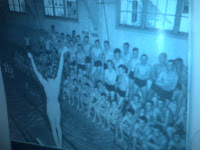 Born near the Ohio River, I can't remember ever learning to swim. I just swam all my life. Many of those who were from the plains states away from the water could not swim. Jumping off the high platform into deep water was another terror for them. If they didn't jump they were pushed, screaming from the high platform, pushed not very gently I might add, with a long pole. After they were allowed to half drown the pole was then given to them and they were pulled out. They were then required to learn to swim on their precious personal time.

The most dangerous thing in the world for a sailor is not battles at sea. It is a fire at sea. There is a rating for fighting fires, Damage Controlman, but everyone had to go to Fire Fighting School. 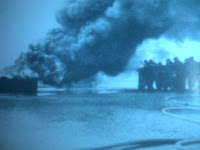 There was a small building which simulated a compartment aboard ship. Oil spouted out of the walls and ceiling. When the oil was lighted it became an inferno. Dressed in Oil Skin clothing holding fire hoses the guys had to march into that burning building and put out the fire. It was a hot, dirty and dangerous assignment.

My little crow stood me in good during the day of fire fighting. The firemen picked the squad leaders to go to the Fire Station and paint. I spent the day outside, by myself--a real winner, in the sunshine, painting street curbs yellow. Yup! Squad Leader Pierce the painter. HA I would eventually earn a crow, Radioman Third Class, RM3, but that is another blog. Uh, yes, I still have my RM3 arm patch. 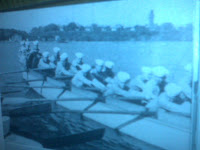 We learned to row a boat on Lake Michigan. Wow! That was just like home except that the 25' cutter we learned to launch was sure bigger than the Ohio River John Boats I grew up with. How difficult could it be to row a boat? You'd be surprised how awkward it was for a lot of boots as they hit each others long oars. Their instruction was not what you would think of as being pleasant. HA 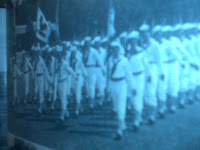 Three months later Company 291 passed in review at graduation. Afterwards, we who passed boot camp, (some didn't), went through the same main gate. We were now Second Class Seaman. We laughed at the group of guys at the gate just reporting to boot camp. At long last, we were walking along without leggings, hooray. 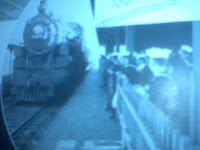 We were bussed to the train station where we headed home for a 30 days leave before reporting to ships. Instead of going directly to the fleet I went to a Class A Radio School at Norfolk, VA. After graduation from Radio School, with a promotion to Radio Seaman First Class, RMSN, (equal to a Corporal in the Army), I reported to the USS Yuma ATF94 in Vallejo, California. Again, how long ago was that? Check out the steam engine train, then the latest thing in transportation.

A trip down memory lane? Yes! The training, discipline and leadership skills which I learned in boot camp and aboard ship further developed the character that would, and still does, sustain me in life.

My DD214 discharge papers said I had served my country for 4 years, 9 months and 17 days. As a Petty Officer Third Class my monthly pay, including a $20 a month Sea Duty Bonus, a $20 a month Longivity Bonus, (For every four years you get a hash mark on your sleeve and this bonus), and a $20 a month Battle Efficiency Award was $134. Ummm. Would you believe I saved $10 a month from my first pay in Boot Camp until I was discharged?

"Eternal Father, strong to save, whose arm hath bound the restless wave

Who bidd'st the mighty ocean deep, its own appointed limits keep.

Oh hear us when we cry to Thee, for those in peril on the sea"

I enjoy your "trips down memory lane." Keep them coming!