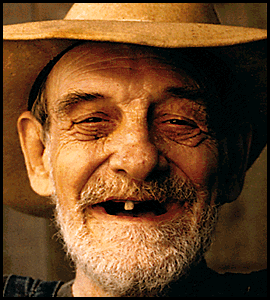 IS THIS A HAPPY & CONTENTED LOOK OR WHAT?

I can almost hear my mind peacefully sigh as I whet my pocket knife. I've been using the same fine whet stone, in a leather holster, for, I don't know, maybe 40 years. It is a good stone for which I paid a bit of money. It shows no wear for the nearly daily use.

THERE IS NOT A SINGLE DAY GOES BY THAT I DO NOT USE MY KNIFE SEVERAL TIMES. I don't know how people get by without having a knife all the time.

My knife is fairly new. I lost my "lucky" knife on an attempted cross the USA bike trip about a year ago. Catching the "red eye" out of San Diego I thought "what will I do with my knife" when I realized I did not have the knife. The pockets on my bike pants are big and, sitting reclined on the trike, I'm sure the knife just worked it's way out of my pocket. I hope who ever finds it appreciates it. I actually found the knife myself.

Returning upriver from maybe a month on the Ohio River in an old john boat, south of Ashland, KY, I put in to shore at a protruding sand bar. It was October but the sun was hot and I needed to get into the shade for awhile. The sand bar was badly trashed. Cans, bottles and paper everywhere. In the midst of the trash I spotted a brand new Case Knife Hoster. I thought "wow, I wonder if the knife is here somewhere?" It was, lying with the large blade open. Now, I would have returned the knife to the owner, but as when I in turn lost it, there was no way to know who or where the owner was.

I bought a replacement Yellow Case Knife immediately upon my return from California. I feel undressed without that big, yellow Case knife anchoring me in my right, front pocket. I carry very little in my pockets. My money, no change, and ID in a small money clip in my left, front pocket, a large, mostly red, hankerchief in my right rear pocket, thats about it.

I always have my knife. In response to the question "Do you have your knife" I always answer "Do I have my pants on?" If my pants are on that knife is in my right front pocket. Often the kids or my wife will give the answer before I can get it out. "Does he have his pants on"?

I tried, unsuccessfully, to take it to the Army-Navy game in 2001, the last year Navy lost to Army. At the hotel my son, Todd, also a knife carrier, informed me that he was leaving his knife in the hotel. It was right after the attack of nine-eleven and security would be tight. "No", I replied, "its legal and it goes where I go". WRONG! I took a stroll from where the guard stopped me and came back without the knife. I went back to get it after the game.

There is a skill required to properly sharpen a knife. But, what is really required is time. It takes time. Now, you don't have to spend a lot of time each time you sharpen it. Once the knife is sharp just a few stokes daily will do the job. A drop of honing solution, I use Smith's, on the stone, a half dozen stokes on each blade, and the knife is constantly keen. Thereafter, I will hone it a stroke or two just for the tranquility.

My Dad kept the sharpest knife. Once when I was squirrel hunting down in Southern Ohio, near Marietta, I had just finished eating an apple with my knife, sitting under a beech tree. Seeing a grey squirrel, I stuck the knife into the beech tree and picked up my gun. The squirrel fell but it was not a clean kill. Quickly getting up to get the squirrel, I forgot the knife. It was the last day of hunting and leaving for home, I gave my squirrels to my host without cleaning them. I recalled my knife in the tree that night when I unloaded my pockets. It was cheaper to buy another Case Muskrat Skinner than to drive back to Marietta.

Squirrel season, next year, I returned to that same beech tree. The knive was not in the tree but digging in the duff around the base I found it, rusted into one piece. I took that knife home and gave it to Dad who soaked it until it worked easily. He then proceeded to sharpen it. He kept it until his death and then my Mother gave it to my brother Henry. BOO! 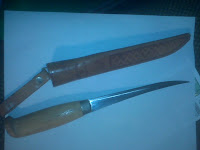 I have a small knife collection. My favorite nephew, Jimmy Pierce, has given me several knives over the years and I have bought several, all sizes and uses. My son, Todd, ended up with my original filet knife, although I currently own two, both gifts, the one in the picture was from Jimmy. Well, actually penny sales. You never give a knife. It would "CUT THE FRIENDSHIP". You always "sell" the knife for a penny. Un huh!

My oldest grandson, Jon Pierce who is expecting his fourth child, still carries a red, utility knife which I "sold" him for Christmas when he was about 12 years of age. My youngest grandson, Riley, has a boxed collector's edition of the old Barlow knives which I "sold" him when he was about two years of age. No, Riley hasn't started to carry it yet, although at his age, eleven, I had been carrying and trading knifes for years. Things change, huh? He'd go to "jail" for carrying that knife to school, which I always did. 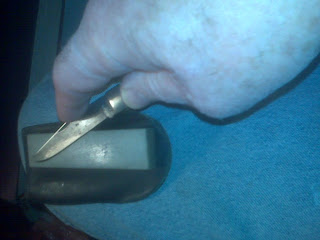 AHHHH, Life is sweet! May you find peace and contentment in your life.