Few things in life are more enjoyable to a parent than the excited voices of their children. Few children can get more excited than my youngest son, Todd.

In a voice crackling with excitement he told me over the phone that he and his wife, Amy, were planning to ride their recumbant bikes across the state of Ohio, starting on the Kentucky side of the Ohio River at Cincinnatti and riding to Lake Erie at Huron, Ohio. Would I like to share in their excitement? I would! 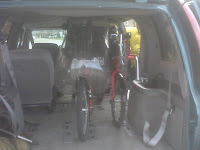 Todd and Amy are year-around-bikers. Todd has 15,600 miles on his bike. Living near Cincinnatti, it gets cold but not too cold with the right gear. They have ALL the right gear, including two RANS recumbent bikes. Their first request was for me to drive them home from Huron so Amy could be present as teacher in the Mason School District. She is an art teacher. 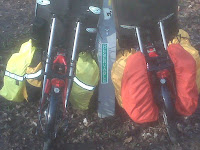 As the trip plans developed with my willingness, even eagerness, to assist, the plans changed. Would I meet them at their last tent camp site, Alum Creek State Park, just north of Columbus, and transport their cooking, camping gear? I would!

Their good friend, KAREN REED drove them and their gear to the south side of the PURPLE PEOPLE EATER BRIDGE in Cincinnatti. From Kentucky, in 80 degree weather, they started pedaling North. They would pedal each day for eight days, six of which would be very hot. That changed!

KAREN emailed me a first day report. With a hard tail wind pushing them, they averaged 17MPH hardly touching the pedals. GREAT START. It would continue throughout the trip until the last day. 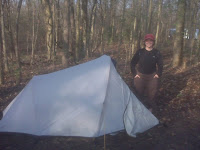 I got to the ALUM CREEK CAMP SITE with my van just after dark. It was in the midst of a violent THUNDER BOOMER. Todd and Amy had already sought shelter in their tent for the night. I spent the night in the van, quite comfortable in my own mattress and sleeping bag. In addition to the thunder and lightening, a train track was close by and trains blew whistles all night. 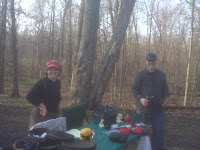 At breakfast time the grounds were wet but we were all dry and hungry. I had brought my coffee maker, which Todd and Amy gave me as a gift years ago, and a nut roll. Todd, the camp cook like his Dad, made he and Amy OATMEAL--Todd is known for his oatmeal in the morning, and a beautiful and delicious omelette. Coffee never tastes quite as good as it does out-of-doors. 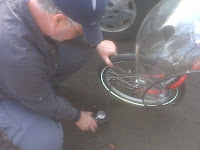 After breakfast Todd said he wished he would have had me bring my bike pump. He, of course, had a small frame bike pump, but it sure takes a lot of pumping. Being the dependable father, which I am--if you don't believe it, ask me, I'll tell you--I told him I didn't have my bike pump but I had brought a small compressor if he needed it. He did! 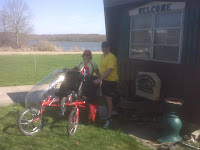 After riding these loaded bikes for days, with low air in Amy's tires, they seemed to fly on their way to the families retreat at Knox Lake. I hauled them and their gear to their brother, Mark's, home in Mansfield for the night and returned the next morning to return them to Knox Lake. They rode on to Mark's, left their gear in his garage, and proceeded on the last three days to Lake Erie.

On their last night out, they stayed in motels, Todd called to say he was badly chaffed and unless he healed over night he might not be able to ride the last day. Could I be in the area early the next morning if they needed me. I could and was on Lake Erie at 10:00 the next morning. 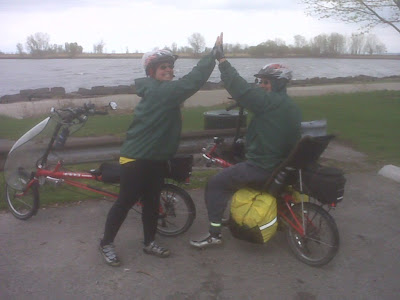 Huron is one of my all time favorite fishing spots but it was cold, snowing and about a 40MPH wind. Not a day for fishing, although I did give it a brief try, thankful that the fish didn't hit. I had bought a 965 page book just for this trip and was deep into it at about 4:00PM when I heard Amy's YEEEEEAH, WE MADE IT! They hugged and kissed, jumped up and down and gave each other high fives. Why not? Riding 293 miles in eight days of April was something to be excited about, huh? 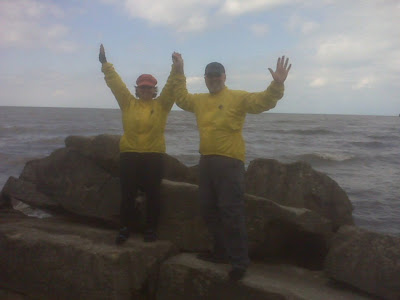 We all needed an "Oil Change" by the lake. Where to go? Not far! Todd and I stood in reeds by the lake. Not Amy, uh, I watched as her red had ducked out of sight. I told her I took her picture. She howled. How funny. Funny also was Todd's comment after riding in the warm van for a few miles. He said "I've got feeling coming back in my nose"! Amy replied, "Why, I've got tingling coming back into my butt". Yes, they were nearly frozen! 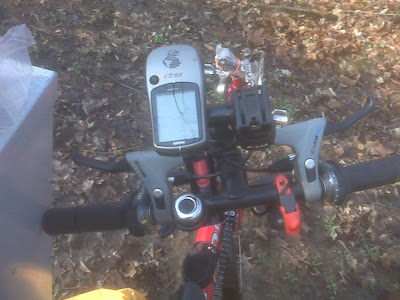 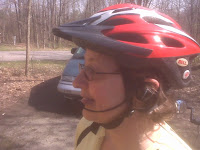 Were they bored on the trip? No, they were in constant radio communication with each other. They also enjoyed music and stories on their IPads. All their gear, as can be seen from Todd's bike, is state of the art. 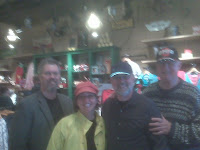 We drove back to Mansfield for dinner, Todd & Amy's treat, with my eldest son, Mark, at the Cracker Barrel. I then drove them on to Cincinnatti. After unloading their gear I headed back toward northeast Ohio and home. Got in about 5:00AM.

Life can be so exciting, if we just give it a chance.

God Bless us each and everyone and God Bless the USA!

Thanks, Dad, for the great road support, picking up our camping gear midway, and the long ride home! And a big thanks to all our PACERS (Pierce Annual Cycling Expedition Road Support): Dave and Karen Reed (thanks for the water and firewood), Mark and Mary Kay Pierce (thanks for opening your home and great food), and Dad. We would never have completed the ride without all the great support. :D

Congratulations to the PACERs. Great ride! Had fun at our house! Mark