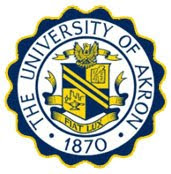 The class was in the student introductory phase for the COMPUTERS BASICS course at the the University of Akron Community College. Working her way around the students, the prof got to me and inquired what I thought caused a specific problem common to computers. I assured her I absolutely knew the source of the problem, and shut up. She pushed me for more, as I knew she would. In my best Irish Brogue I said, CLEARLY, AND NOW, T'WAS THE WEE FOLK.

Amid the classes laughter, far older than the next oldest person, I became a marked man, a trouble maker, a would be Irish Riff Raff. Sure, and now wouldn't you be a knowing that when the course ended six weeks later the Prof, a lovely young woman, asked if I would be a mentor to her in her business aspirations. I would and we developed a lovely relationship. LIKE, AM I THE KIND OF GUY WHO WOLD PUT YOU ON? Ummmmm.

I was reminded of that class of several years ago and thought of the young lady whom I counseled as I had counseled my own children when they were young. Although she had her PhD, a prof-ship at the University, owned real estate and two businesss, she was not pleased with her lack of direction. She said that I had helped her, and I believe I did. We stayed in touch for a year or so. She really was a nice, young lady.

What triggered these thoughts? A FAIRY RING! 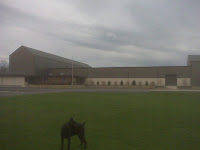 I was walking Gunner in the field bordering what I still think of as the old SEIBERLING LATEX PLANT. When I had just joined this rubber manufacturing company in 1953, I provided technical assistance to what we thought of as the Mat Division, we made automobile mats in this building at that time. I have exercised many dogs on these grounds for decades. 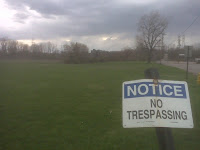 The plant is now the B & C Company. Shortly after I started to exercise my Giant Scnauzher, Gunner, someone put up a small NO TREPASSING sign. I contacted a member of the board and asked about that. He assured me it was just for the purposes of insurance, that I should continue to exercise my dog there. I stay by the road but allow the dog to trepass. Hmmm.

I did trepass today, however, because I thought, unless my old eyes were fooling me, I was looking at a real, honest-to-goodness FAIRY RING. With great circumspect, I strolled carefully across the grass and, sure enough, there was this beautiful FAIRY RING, probably ten feet across. 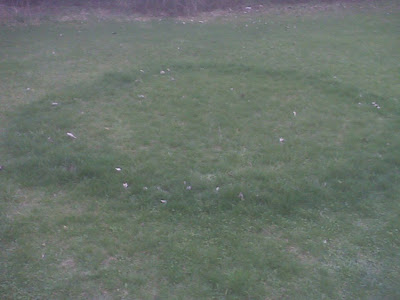 YES, YES, YES, I KNOW, those "learned" people will try to assure us that the so-called fairy rings are caused by the spore from the sporeaupus. I KNOW BETTER. Who would I trust, these people, none of them even a hundred years of age, or those wise folk from down across hundreds of years who assure me of the existence of the WEE FOLK? 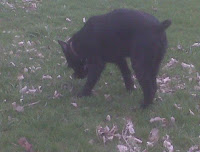 Why, even old Gunner understood that it was a magic moment. I mean, why else would he be grazing on the tender, new grass? Clearly, the WEE FOLK had cast a spell over me dog making him believe he was a cow. 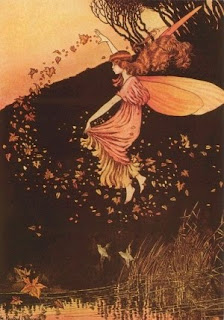 RING OR PIXIE RING, they are all caused by the same thing. It either marks the way into the ELFIN KINGDOM, or it is a place where ELVES GATHER AND DANCE.

After a week or so, the ring will disappear without a trace. UNLESS IT WAS MAGIC HOW COULD THIS BE? If you wait around there long enough you may be able to catch one of the WEE FOLK with their pot of gold. I don't know that this is the truth but I won't be so foolish as to be a'saying it's a lie!

Have you ever had to dash out of the house on an important mission, I mean with your coat on and your bag in your hand, and you reach for your car keys. You don't have to look for them because you know right where you just laid them. You put them besides the phone on the desk when you received the summons to hurry. You are too frustrated, as you tear up the room, to hear the snicker of the WEE FOLK from under the desk.

When you are almost reduced to tears you hear a jingle in your coat pocket and there are your keys. IMPOSSIBLE! You did not have your coat on when you received the phone call. As you rush out the door in relief you miss seeing the WEE FOLK giving one another HIGH FIVES!

Car keys or computer glitches, trust me, it is the WEE PEOPLE.

God Bless you and God Bless the USA
Posted by Walt Pierce at 6:05 PM

3 for 3! Keep it up. If West Virginia wins tonight, will there be a blog about WVU? Mark