My brother Henry and his wife Cookie invited Julie and I to share a beach vacation with them in 1989. Cookie had won a week at the Royal Garden Resort in a World Book sales contest. We had just bought a new 1989 Lincoln Town Car and enjoyed the drive, going through the mountains, on the way to the Myrtle Beach area of South Carolina.We thoroughly enjoyed our visit and the next year we returned to beach camp at the local State Park. It was enjoyable but certainly not the same as the condo. It was our second trip in the summer and it was really hot. 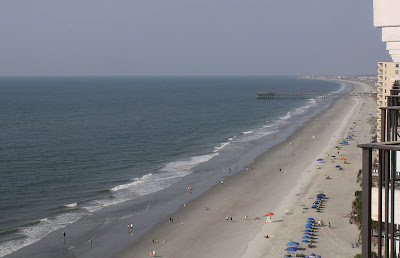 The following year we returned to the condo for a week. We had a great time but it was just too far to drive for one week. Also, it was too hot and crowded in the summer months. From that time on we leased for the entire month of October. The weather was mild, the beaches empty and the out-of-season monthly rate about the same as a weekly rate in season.

We stayed in various units but after about the 4th or 5th trip we started leasing a penthouse suite, unit 1604, always renewing the lease for the following year. For health reasons we have missed a couple years but, I think, this will be our 19th trip. This beautiful penthouse suite has, to some extent, become our home for 1/12th of our life. 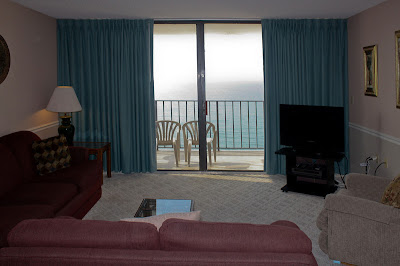 Although it is not anything really fancy, it is very comfortable and roomy. Looking seaward from the 16th floor balcony you can see forever almost. The view of a full moon reflecting on perhaps 20 miles of calm ocean is spectacular. One year we were there a week after Huricane Hugo made a direct hit and another year we weathered a huricane going up the coast to make landfall just north of us.

We have almost always had at least two couples as guests, changing groups every Saturday. Sometimes we filled every nook and cranny, wall to wall. As there are three bed rooms, two with multiple beds, and a great roll out couch plus two twin mattresses for sleeping on the floor, that is saying a lot. We have even gone so far as to add inflated mattresses. At times people have even slept on the balcony. JUST LIKE IN OUR HOME, IT HAS ALWAYS BEEN, "THE MORE THE MERRIER"!

Our two sons, with a couple they invited, stayed a week each, at times with some of their children, spouses and the grandchihldren. Sometimes the teen age grandchildren would bring a friend. Our daughter with her children stayed a week. The fourth week we would invite our friends. One couple's young children thought that was where we lived, a funny story too long to tell.

Everyone was treated as our honored guests and, quite simply, it was "PARTY TIME" for a month. Julie and I both love to cook and we cooked up a storm. Big breakfasts daily, folks mostly made their own lunches, we provided the fixings. We ate out a time or two each week with the different groups, otherwise Julie and I cooked.

Over the years special dinners evolved to be repeated. Steak night, we brought the steaks from Bennett's Fine Meats in Canton, Ohio. One year we had to have the steaks air shipped on dry ice. We buy whole loins of strip steaks. There was a spaghetti and meat ball night. Perhaps the best night of all was "Finger Food and Games Night".

Some flew to Myrtle Beach, but most drove. Some took two days to get there, as Julie and I do, others drove straight through, taking about 12 hours. We always got there a day or so before the first guests and always had the same meal to welcome each group to the beach. I'd make a corn chowder with corn bread. Julie would make a fabulous, large taco dip with veggies and chips. Can you say Strawberry Margaritta? I would also bake an apple pie. This became the expected meal when each group arrived.

Neither Julie nor I are in the best of health. For that reason this year we have restricted the number of guests. The first week my oldest son and his wife will visit as will a newly discovered and dearly loved cousin and her husband. The second week we have a grand daughter and great grand son. The third week my daughter and her two children and two of our friends will visit. We will only stay three weeks as I prepare in the last week for a hip replacement in early November. My youngest son and a couple who have visited with us many times will enjoy the last week without us.

Life is so good! The annual trip to the beach has become a tradition and a good one. If Julie ever retires, and she will some day, I suspect we will spent the winter months in this lovely part of the world. Meanwhile, for awhile at least, we will LET THE GOOD TIMES ROLL!

Be reminded to vote.

I can hardly wait!

Hi Walt,
My name is Jane and I'm with Dwellable.
I was looking for blogs about Royal Garden Resort to share on our site and I came across your post...If you're open to it, shoot me an email at jane(at)dwellable(dot)com.
Hope to hear from you!
Jane