FAMILY STORIES, truly treasures to be passed from one generation to another.

One story that has come down through the years in the Pierce family concerns my grandfather, William Henry Pierce, called Jersey, and his son-in-law, my uncle, Bob Wears.

Like the Pierce's of today's generation, my grandfather loved to play a joke. His son-in-law, on the other hand, was a very serious person. Bob Wears was a powerfully built black smith who could play a fiddle well. Uncle Bob was quite superstitious. Afraid of the dark, he tended to stutter when he was scared.

Early in his marriage to my Dad's sister, Emmy, Uncle Bob lived with his father-in-law in a house at the head-of-the-hollow, deep in the West Virginia hills. Long before the days of interstate highways and cars, there was only a crude, barely discernible wagon road to their home. Even today their home would be deep in the hills with hardly a road to it. 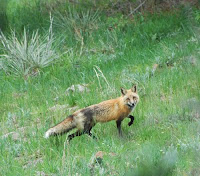 These men lived to fox hunt. Mind you, they never caught the fox. No, that was the last thing in the world they wanted to do. They lived to enjoy the sound of the chase. At night, after all their work was done, they would go to a particular hill where they could hear the chase well, build a fire and argue about which dog was in the lead after one or the other dog made a "strike" on a fox's trail. 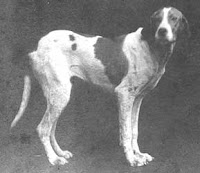 From many chases of nights gone by, they were well acquainted with individual foxes and the tricks that a particular fox tended to play on the dogs. In the wee hours they would call the dogs in with a horn, catch them up and head for home. Grandpa's hound was named "Old Nip" and he was well trained to heel. Uncle Bob's hound had to be led along on a chain.

Going from home, before dark, they would take a short cut to their hill top passing by a house reputed to be haunted. A man by the name of Tom Sebrill had been murdered in the house and it had been abandoned. Coming back at night, walking by the light of a kerosene lantern, they would walk the long way around to avoid this haunted house. 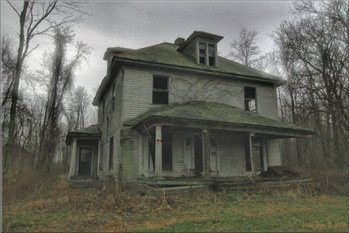 One night Grandpa Pierce, in true Pierce spirit, headed home, walking in the dark, by way of the haunted house. Uncle Bob, stuttering badly, asked, "wh, wh, wh, where are you going, Jersey?" Grandpa replied that he was tired and was taking the short cut home, all the time laughing at his son-in-law's fear.

Bob stuttering ever worse explained over and over about the haunted house, pleading with Grandpa to turn around but afraid to do so on his own being afraid of the dark. This continued, much to Grandpa's glee, until they were actually at the haunted house.

When they got to this old, run down house, Grandpa walked right up onto the porch, jumped up and down calling "TOM, OH! TOM, COME FORTH, TOM, COME FORTH". To his delight, his son-in-law was terrified.

Now, unbeknown to Grandpa and Uncle Bob, a mentally ill person called "Crazy Tom" had moved into the old house after they had passed going hunting. Down the shortcut path from the house lay a creek with a crossing log. In this path the new occupant had build a temporary pen for a big, black sow.

In response to Grandpa calling "come forth Tom", from deep within the haunted house, came a ghostly reply that has lived down through the years: I'M A'COMING, JERSEY!

From this point on, the story is in dispute. What is accepted as gospel, however, is that when the two men ran over the big, black hog in the pathway, they thought they had awakened the devil himself. What was also clear, both men missed the log and went through the creek, clothes and all. At that point, Grandpa and Uncle Bob got separated. Grandpa had the lantern. Bob was in the dark.

When Grandpa got home Aunt Emmy asked "Where's Bob, Pa?" Grandpa grumbled something about "the fool running off in the woods" as Grandpa headed for bed. (I suspect he needed his rest!)

Shortly after day break, Uncle Bob got home. He was out of his head. He was mumbling incoherently and shaking badly. He had a death grip on a broken chain which Grandma Pierce and Aunt Emmy could not release. His clothes were wet and torn and he was scratched all over, having obviously ran through many briar patches. They got him to lie down, chain and all.

Late in the afternoon, everyone sitting on the porch expressing awe about what had happened, both men having different stories, someone was spotted coming up the hollow. It was Crazy Tom.

After everyone had said their "howdys", Crazy Tom said "I heard you calling me in the haunted house last night, Jersey, and I told you I was a'coming, but you ran." "What did you want, Jersey?" And, Crazy Tom said, "There was a dead dog in the yard". Seems as how the dog went the wrong way around the tree from Uncle Bob and, as his chain was broken, so was the dog's neck.

Grandpa lived to be 91 years of age. To my knowledge, throughout his life, he swore that truly Tom was crazy because, as he insisted, he had never run a foot, wet clothes not withstanding.

Heard in our family today will be the words "I'm a'coming Jersey". I just said it to my pretty wife, Julie, which inspired me to share this story with you. Truly, the truth is funnier than fiction.

What stories does your family share? Are you passing them on to the oncoming generation?

I trace my family history so I'll know who to blame. Every family tree has some sap in it!

Dad - Another great story! You're really on a roll this month. Enjoyed this very much! Thanks! Mark

I love this story! This is what makes your blog great. Keep it up, cuz!