What a great weekend this has been! 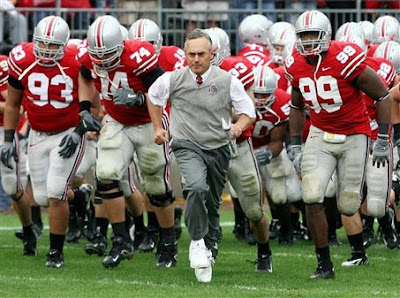 Friday night I had the extreme priviledge of cooking for 24 of my family at the home of my oldest son, Mark. Two grandchildren living in Boston and Virginia with their spouses were absent as was a granddaughter in law, Bethany, who elected not to be around me because of a bug with which she was infected.

VERY SPECIAL INDEED, was the effort put into attendance. Schedules had to be arranged, work hours altered and, no small thing, Christy Anne drove from Cleveland, her mom and dad, Todd and Amy, from Cincinnatti and Jillian and Tim from Dayton, all long drives to Mansfield. Todd, Amy and Jillian pictured here. 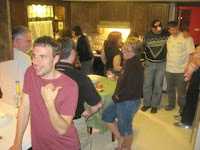 WHAT A BLAST! I fried a large amount of Lake Erie Walleye alongwith some Yellow Perch. My pretty wife, Julie, made cole slaw and deep fried lots and lots of french fried potatoes.

As my grandson Riley opined, those french fries were different and really good, to which my daughter, muttered something about grease city. Hmmmm! The fellowship was grand as can be seen in this group picture with grandson-in-law, Tim in the foreground.

Yes, I baked three pies. An apple, a peach and a rhubarb. Julie has been fussing at me for making my pies too sweet. I KNOW, HOW CAN SOMETHING BE "TOO" SWEET. I cut the sugar in the rhubarb in half and it would be kind to only say it was TART! I just baked a rhubarb pie in Myrtle Beach and it was pretty good. 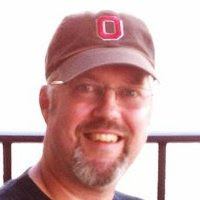 Mark arranged seating so that we could all be within eyesight of each other if not at the same table. It takes a big table for 24, huh? Sitting at the table with my children, their children and some spouses after dinner was a delight. THE AFTER GLOW FROM ALL THAT LAUGHTER WILL SEE ME RIGHT THROUGH MY UPCOMING SURGERY. Thanks people!

Today Julie had some of her children and grandchildren in for tacos and the Browns game. The browns had the same sour smell they had the last time I watched them, which has been a long time ago, but the taco and family fellowship was good.

Mark wrote a blog about the Fish Dinner in his church blog, http://www.churchrequel.com/. If you really have an interest, and want to see what a professional blog looks like, check it out. Mark said some very kind words about my desire to see the family and the willingness to provide a meal for everyone, while I suffer with a really bad hip, as being EXTRA ORDINARY. I don't think so.

LIFE IS JUST LIFE. It is up to us to decide what we want to make of it. I have truly seen the good, the bad and the ugly, and I still think life is great! 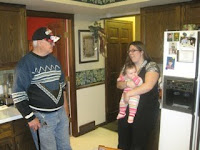 I have known joy, like when my first grandchild, Jennifer Susan was born. Here is Jenny's picture with me and with my latest great grand daughter, Lila. A gathering is always more jolly when Jenny is present. Like her Dad, Mark, if there isn't something happening, she will stir up something. My kind of people.

I have known misery, like huddling in a Brier patch in a sudden, unexpected cold rain. The newspaper, intended to start an all night camp fire, flattened out over the briers as a roof to shelter my young fishing buddy and I from the sudden cold, wet rain. The paper shed the deluge for maybe 20 minutes or so then it just "filtered" it a bit. That cold rain probably lasted all night but I don't remember. Shivering like a dog passing razor blades, we gave up all plans to catch cat fish and ran for the warm, dry car, a half mile or so back up that muddy hollow. Considering, I guess this episode was of both misery and joy. That car heater was sure a joy, huh Todd? 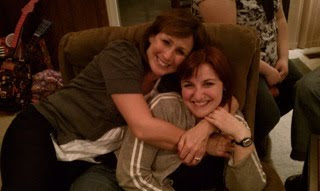 Helplessness? Yes, I have experienced this all too many times. One experience that comes to mind had to do with my daughter Kimberly, shown above with Christy Anne. Christy is also known for her "stirring up the pot" personalty. When very small, Kimberly had breathing problems which was diagnosed as the result of allergies.

The doctor gave her an inoculation about once a month but had her in every Saturday morning to be tithered. This involved puncturing her arm maybe 20 times with a blunt ended tool covered with some type of allergy. Then we'd wait an hour to have her reaction measured. She would then be treated accordingly.

Bless her heart, she was so brave. I know it hurt. Like the time Todd had his little finger reattached when he was a kindergardner, all I could do was tell her to be brave. She never once flinched. She never once cried out. It was a very painful ordeal. My heart broke at each and every tear that flowed down her cheek. 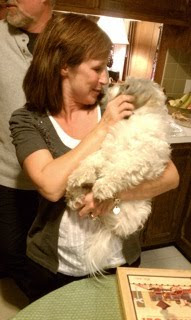 Today, Kimberly may be the toughest minded of my three children. Sarah Palin's "Momma Grizzle Bears" comes to mind! Yet, her little dog, Bella, knows she is a cream puff!

The saddest thing of all of Kimberlies problems, was after her doctor died. When we went to the replacement doctor the first thing he said was he had to see if she truly had an allergy as most of the dead doctor's patients didn't really have any. Although extremely well known, the deceased doctor was, in fact, just fleecing his patients.

HE ALSO SAID IF SHE DID HAVE AN ALLERGY, A SHOT A WEEK FOR SIX WEEKS AND A SHOT TWICE A YEAR WOULD TAKE CARE OF IT. THE WEEKLY TITHERING WAS NOT AT ALL NECESSARY.

This is some of the sadness I have known in my life.

But, there is Paul Harvey's "the rest of the story". Kimberly still has some breathing problems, inhiered from her maternal grandmother, but she deals with it. She went on to become one of Norton High School's prettiest cheerleaders. NO, I AM NOT PREJUDICED AT ALL, I JUST TELL IT LIKE IT IS, PERIOD. She was a cheerleader for five years, Captain in her junior year and President of all the cheerleader squads when she was a senior.

SOMETIMES LIFE JUST TAKES A LITTLE TIME TO PLAY OUT.

And, so it is with my hip. There is still "joy unspeakable and full of glory" but it is temporarily tempered with pain from a deteriorated hip. After the hip replacement, I may get my left knee replaced, a new heart and. lo and behold, I may redo the last 80 years all over again. It's been a blast!

In addition to the love of my Mother, and the loving support of my good wife Julie, these three, my children, Mark, Todd and Kimberly, are the greatest joy of my life, absolutely. 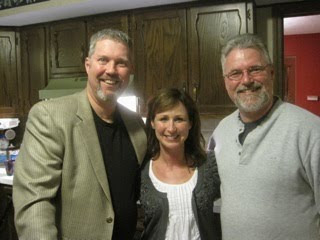 Oh, yes, thanks for all the free fish, Don Wilson! You are a gentleman and a scholar!

In the end, LIFE IS JUST WHAT WE MAKE IT! MINE IS SPECIAL!

Love, love, love this blog article. I will return to it often. Thanks for the reminder that life is what you make of it... Love Mark