Yesterday we received a beautiful "thank you" card from Todd & Amy, Dave & Karen, my son, his wife and their friends. The card perfectly expressed the spirit of my daughter-in-law Amy who I would bet picked out the card. 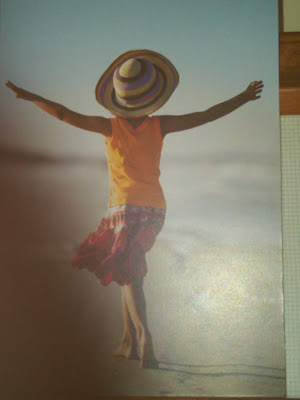 They said in the card "What an incredible week we had at Myrtle Beach! The weather was awesome--we played so much everyday in warm water & surf" and went on to tell us about the fun they had and how they appreciated the gift.

The card and the expression of love justified the cost and effort.

SADLY, THERE HAS DEVELOPED A BAD THING FROM THE MYRTLE BEACH EXPERIENCE. 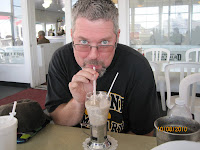 No, it was not our guests or their "misbehaviour". We loved that! This is a picture of Mark trying to prove that you really could suck an extra thick milk shake through a straw at Johnney Rockets. Go Mark! 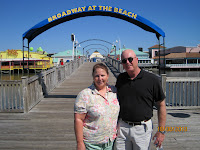 What a time we had at Broadway at the Beach as can be seen in these pictures taken by cousin Cheryl: 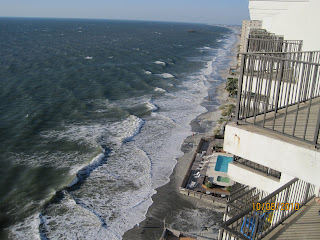 It was not the weather or the beach. It was the best ever as can be seen from this picture taken from our balcony of "tide in".

It was not sharks in the ocean, although such was reported by Jack, my cousin's husband.

It is a Pierce "truism" that whoever tells their story last tells the "bigest".... So not to be out exaggerated by another fisherman when he told me the length of the sharks, I asked if he was measuring the distance between the eyes like I do. Would you believe he came up with this picture of THE LITTLE ONE HE BROUGHT HOME?

And, no, it was not the food. We definitely ate in more than ever before. Julie and I did all the cooking. Peel lotz of those spuds, Walt! Gotta a lot of eaters in this crowd! 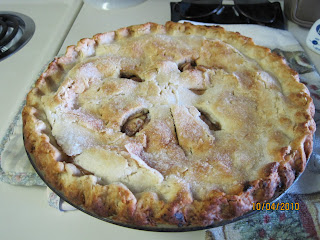 With a complete lack of modesty, I'll tell you the food was great as represented by the picture of my strawberry-rhubarb pie.

So, what was the fly in the buttermilk, you might be asking?

Well, yes, she did catch my cold and lose a couple weeks work when she lost her voice. I am not talking about that. I mean, thats just part of life, huh?

She did not catch her infection from me. SHE CAUGHT IT FROM MY COUSIN CHERYL AND MY DAUGHTER-IN-LAW, MARY KAY! She has the infection and I am the one that is getting sick. Go Figure!

The infection? DANCING WITH THE STARS! 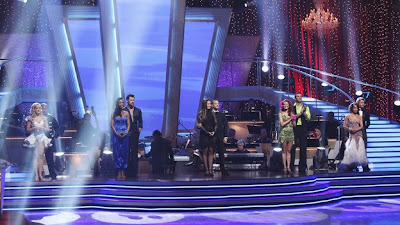 Really, television was about as good as it gets, and on a very large, flat screen TV. There was just a lot of college and pro football AND the baseball playoffs. What more could one ask for is what I'd like to know!

Did the girls enjoy this wonderful entertainment with their men? Absolutely not! They went into the master bedroom to watch THEIR show.

DANCING WITH THE STARS.

At least two mornings a week now, I have to endure endless conversation about who did what, when and how on the previous episode. I must hear in great detail about how unfair the professional judges decisions were and how it should have been and why.

YAKIDDY, YAKIDDY, YAKKIDY! On and on and on! WHO CARES HOW A BUNCH OF NEAR NAKED WOMEN PRANCE AROUND ON THE STAGE. Trust me, if I got excited like that about other females I be in the dog house royal!

And the names! Kristi Yamaguchi, Maksim Chmerkovsky, Anna Trebunskaya, Carrie Ann Imba, or Nichole Scherzinger, WHAT IS THIS, THE INTERNATIONAL OLYMPICS? Where did these people come from, anyway?

Thanks Cheryl! Thanks Mary Kay! I told Julie that her failure to watch O'Reilly was grounds for divorce in my household. Do you you understand the meaning of PUT A SOCK IN IT, PIERCE?

Cheryl and Mary Kay, what have you got to say for yourselves? SHAME SHAME SHAME!

Mark and Jack, TIE A KNOT IN THE END OF YOUR ROPE AND HANG ON! This too shall pass. Uh, I mean, won't it?

I reserved this beautiful penthouse suite located right on the beach for next October again. It is my Christmas gift to the family, an all expense week at the beach.

I AM HAVING SECOND THOUGHTS.

I must take my mental health into consideration!

PS - BUTT OUT, MAUDE! NO ONE NEEDS YOUR OPINIONATED THOUGHTS. FACE IT GIRL, MISS MARY'S LONG GONE TO HER REWARD AND SENIOR ENGLISH IS OVER. So There!
Posted by Walt Pierce at 2:11 PM

I can't believe I got the blame for that! Julie is guilty as sin. haha!
We enjoyed our time with you all so much! I have 3 words for the food: Fab U Lous!