THIS ENDED UP A GRAND DAY, a grand day indeed!

The Red Tailed Hawk is one of my favorite creatures in Nature. I tell my wife, Julie, that I don't believe in reincarnation but if I'm wrong, I'm going to come back as a Red Tailed Hawk.

On my way to my daughter, Kimberly's, today, a red tail swooped across the road, maybe 25 yards in front of my van heading for a steep bank on the left side of the road. As he got to the bank he flared his wings, spread his red tail wide, literally stopping in air as his talons shot down to pick up a field mouse. 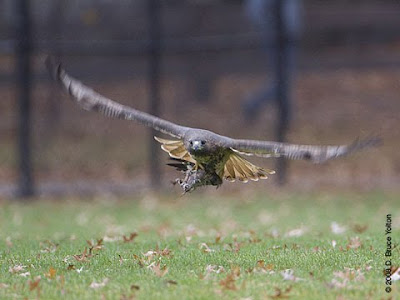 I LOVED IT! I knew it was gonna be a grand day! It ended as a grand day with many a groan along the way.

AT THE IOWA SENIOR DAY AT KINNIK STADIUM IN IOWA CITY, THE OHIO STATE BUCKS BEAT IOWA 20-17. It was the Bucks 1st come from behind 4th quarter win of the season. 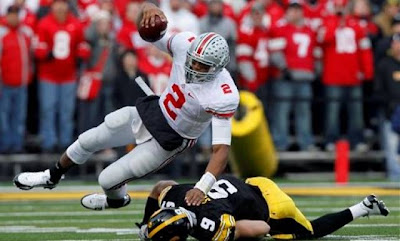 Not needing any sour grape whining in that we won, Ohio State was on the short end of some bad official calls today. They didn't need that as they were committing enough errors on their own. Two egregiously missed calls against the Hawkeyes, as well as several questionable calls against the Bucks, denied the Bucks at least two additional touch downs. THAT'S LIFE IN THE BIG CITY!

Indeed, the Bucks tended to shoot themselves in the foot today. The offensive right end went into motion early on two successive plays. Pass after pass after pass was dropped. Posie, dependable Posie, dropped a perfect, game winning touch down pass in the end zone with 4:02 on the clock. He came back and caught the next pass setting up the winning touch down run by Herron as time was running out. CLOSE! 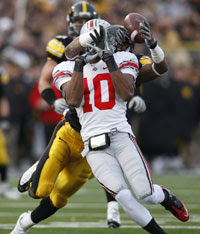 It is always grand going to Kimberly and Jack's home. Big flat screen anyone? Because of the generosity of others, I own two big screen tv's but those new flat screens are something else, aren't they?

Another reason for going to games at Kimberlys? You can always depend on getting sloppy joes and brownies. The only thing wrong with the brownies? Being a type 2 diabetic, I should not eat any, which means I only ate one. YUMMY!

It was a good football day over all as West Virginia and Navy also won. Michigan at Ohio State next week and then a bowl game. In a 3 way tie right now in the Big Ten, the Bucks could still make it to the Rose Bowl. If not, they will be in a bowl game somewheres. Army-Navy game on December 11th at Kimberly's, a tradition of many years standing. Go Navy!

TURKEY DAY AT MY SON MARK'S ALONG WITH HIS FAMILY, OUR FIRST THANKSGIVING DINNER EVER AT HIS BEAUTIFUL HOME, AND FOOTBALL, FOOTBALL, AND MORE FOOTBALL. Yeah!

May your day also have been merry and bright. It would have been if you were a Buck Fan.

Dad - I am so excited that you and Julie are coming to our home for Thanksgiving! We are really going to have a good time together! - Mark