SLUMGULLION: A Feast For Kings!

Feast for a King? Well, yes! King of the Hoboes.

My pretty wife, Julie, and I both love to cook. Julie has her special foods and I have mine. A very special food that Julie fixes only once each year at Harvest Time is Slumgullion. She has just made a large "stirr'in" in our largest stock pot. I ate it at 2AM yesterday morning, for lunch and again as a late night snack. I love it. It is food with which I started life as a youngster in the Great Depression of the 30's.

The dish and title came from Hobo days. In the 30's there were multiplied thousands of hoboes around the entire nation. They only had what they had on their back and in their pockets with maybe a small sack thrown over their shoulder. They "rode the rails" and we lived by the railroad track. On a regular basis they came knocking on our door and Mom always gave them something to eat in the woodlot. (Dad always had them in to "take a pull at the jug" with him and tell stories).

As a whole, the hoboes were a thieving lot, a common characteristic among a lot of people in those days. In addition to "barnyard pheasants" (any farm yard fowl), other people's gardens were the free food bank for the hoboes and other lazy, hobo-minded people. It was not uncommon for "foolish" chickens to follow people home now and again. Why, even a mass harvesting of a large farmer's corn field to be made into "squeezin's" was not unknown to happen on occasion, but not by hoboes. 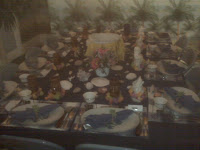 Julie humors me when I quite often invite a few or a lot to dinner, as I did at the sea food buffet pictured on the right. She enjoys it also. I take that from my Dad. Once Dad invited all the neighbors for slumgullion which he cooked over an open fire, in a 5 gallon lard can, setting on rocks over an open fire. Trust me, everyone came and had a great time!
Cooking in a lard can was a difficult thing to do, although I have enjoyed many a meal (lots of corn) cooked in a lard can. You had to keep the fire low and stir constantly. Dad didn't and the food scorched. My brother, Henry, always laughed recalling that everyone complained but not a table spoon of the stew was left. 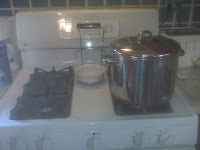 Here is Julie's receipt for the slumgullion she made yesterday: In a large stock pot, with a bit of water and a quarter cup of olive oil add 1/2 head of cabbage, 8 large green tomatoes, 7 small ripe tomatoes, 7 large, yellow onions, 8 large potatoes sliced coarsely, salt and pepper to taste. If the hoboes could have added meat they would have, but then that wouldn't be slumgullion. Julie slowly simmered everything but the potatoes for eight hours, then added the potatoes and simmered for another two hours. You have to "cook it down", hence the "gullion", (mud). 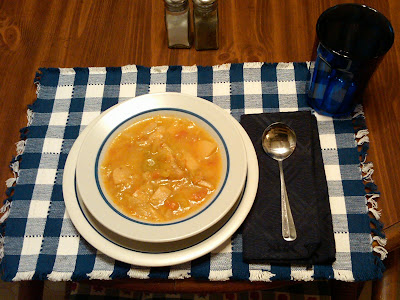 VERY SIMPLE AND OH, SO VERY TASTY! Add a little salt and some fresh pepper.
Bye the way, I searched for an hour for a picture of a lard can. They were so common when I was a child. Shoot, I recall seeing them being used as a young man. The 5 gallon cans were used to store everything. It was not uncommon to see a dozen of the cans lined up on a shanty boat. The one gallon can was used as a "picking" bucket when berry picking. I'm not certain of the most common brand name of lard but I think it was Green Leaf. 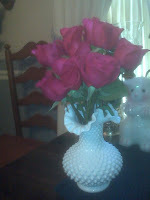 I guess I really am "Older than Old Dirt" as my grandson Riley says.

Yes, you can eat the stew with your shoes off, I did!

Life is good! Enjoy it! Take time to smell the roses!

Jim Davis:
"Vegetables are a must on a diet. I suggest Carrot Cake, Zucchini Bread and Pumpkin Pie".
God Bless!
Posted by Walt Pierce at 2:29 AM

Dad - I loved this story! It never ceases to amaze me that I have known you for 53 years, yet there are still things I learn from you. Thanks for the story of the Hoboes and Slumgullion. Looking forward to Friday! - Mark