DOWN MEMORY LANE: The Road To Hana

I JUST RECEIVED AN ADVERTISEMENT FOR A VACATION IN MAUI. Been there, done that, about four times, now!

On Jan 27, 1986 Ohio had a blizzard with over a foot of snow fall. That morning my son, Mark, and his wife, Mary Kay, along with Julie and I departed for a winter vacation on Maui, Hawaii. All United and other flights out of Cleveland were cancelled except for a Northwestern flight to Chicago. We headed for Chicago, uh that was in the direction of Hawaii, wasn't it?

From Chicago we got a flight to Honolulu, Oahu, an old stomping ground of mine from days gone by. From there we were to take the Maui Shuttle to our destination. It was a small plane, maybe 8 passengers. For some reason, the shuttle airline and United had had a falling out and they wouldn't take our tickets. After Mark argued for at least 45 minutes with the agent, the pilot and the President of the shuttle service, we boarded the plane. 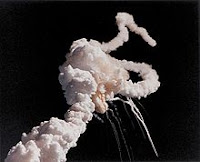 Sadly, the news when Julie and I got up the next morning told of the explosion of the Challenger Space Shuttle with the loss of seven lives. When we met the kids for breakfast I told Mark "The shuttle exploded last night with the loss of 7 lives". Misunderstanding, he replied "Its a good thing we got the flight we got, huh?"

Julie and I were pleasantly surprised to meet up with Dottie and Mary, two ladies from Florida we had met on previous trip to Germany. That trip is another great blog for another day. The six of us rented a small vehicle and headed across the island for Hana. The mountainous road to the windward side of Maui includes 617 white-knuckle switchbacks and 56 one-lane bridges. 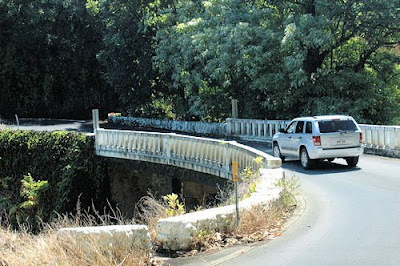 Mary, who was by far the oldest in the group, became ill. There was a traffic back up at a work site. Mary Kay, my daughter-in-law and an RN, walked back down the row of stalled cars until she found a car with small kids. She knew they would have crackers which she borrowed to give to our sick Mary.

What a small world! It turned out that Mary from Florida knew Mary Kay's grandfather in western Ohio. He was in the construction business and Mary and her husband had sold him building supplies. 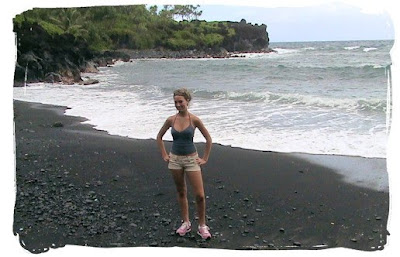 Hana was small with 1950 era buildings. The beaches were rocky with black lava flow and black sand. Only those wanting isolation and peace would normally go to Hana for a vacation. Well, maybe not as it lay claim to Maui's best nude beach, which we somehow missed.

THE SCENERY WAS SPECTACULAR! 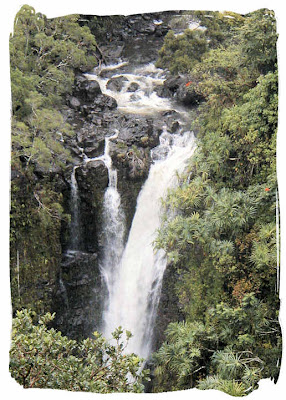 We went sailing, whale watching, to a luau with a pig roast and a Pirate Party. Great trip. Below is a picture of Mark and Julie at the afore mentioned party. Yep! That's what they looked like in 1986. At least, after the third MiTi! Un Huh! Oh, yes, Mary Kay stubbed and broke a toe on some coral. That was a bummer for her. 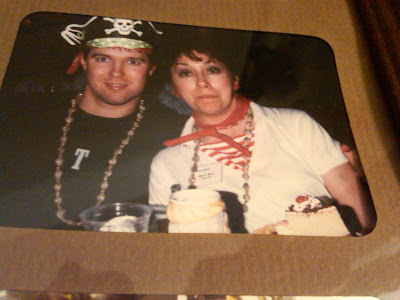 I've had more fun in life than anyone I know. I am so blessed! And, I appreciate it. Also, as i constantly tell Julie, the best is yet to come, starting with our annual Romantic Dinner next week for three couples. Yes, thats another blog.
So often I hear "I wish I could do that". I always say you can. Make your plans and start working toward your goal.
Take care and be careful on the road to Hana.
God bless!
Posted by Walt Pierce at 10:58 AM