A TRAGEDY WAITING TO HAPPEN: Sadly!

There is a tragedy waiting to happen at our house. A new neighbor has a big yellow, GARFIELD-LIKE, cat. As tends to happen, the cat finds shelter from the weather under our deck. I'm afraid he is not long for this world!

MOST OFTEN, HOWEVER, CATS AND DOGS DON'T MIX. When the dog happens to be an Airedale or a Giant Schnauzer, the cat will come out on the short end of the stick every time. 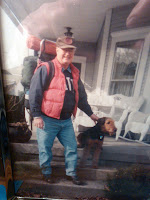 Our last beloved Airedale, Jake, lived for 13 years. Pictured left seeing me off on a backpacking trip. We got him as a seven week old pup. He was a beautifully obedience trained dog, competing in three states. The first five years of his life he paid no attention to cats. Our previous Airedale, Erik, was deadly on cats, however, and had to be carefully watched.

When Jake was about five I was walking him behind a nearby factory. Jake paid no attention to a big grey cat sitting in the fence row. Suddenly, without provacation, the cat made a lunge landing right on Jake's head. With his claws locked into Jake's hide, he proceeded to chew on Jake's ears. It was a furious struggle and I couldn't help.

After what seemed forever, Jake got the cat off his head and in less time than it takes to write this paragraph that cat lost at least one of his lives. The wounds in his ears healed but from that time on Jake had no use for cats and had to be watched just like Erik. 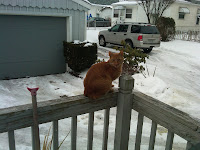 Two days ago as I let Gunner out, the cat was sunning itself on my back deck. It calmly walked under the deck. Gunner paid it no attention proceeding into the drive way to take care of his business. Suddenly, that cat came tearing out from under the porch and made a threatening pass at Gunner. Then it ran back under the deck. Today when I let Gunner out, the cat calmly sat on my deck railing making Gunner walk under him twice going and twice coming. I was sure he was going to jump on Gunner. 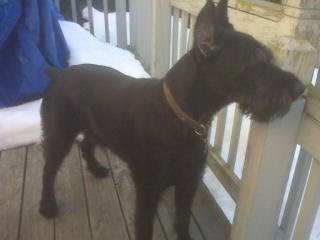 I told Julie about this, she visits with the neighbors more than I, and I wanted her to tell the neighbors. Julie said she was sure the cat was just playing as she had seen that happen before. I hope she is right.

While, unlike my oldest brother, Henry, who was a deadly enemy to all cats, I don't dislike cats, I do dislike the cat owners who let their cats out to foul my flower beds. ANY CAT READERS OUT THERE? Not all cat owners do this. Some are just as responsible as most dog owners. Uh, no, I don't like dog owners who allow their dogs, on a lease yet, foul in my yard and walk off leaving it for me to clean up.

CAN'T WE ALL JUST GET ALONG? HAHAHAHAHA