HAVE RESPONSIBILITIES? Take Them Seriously!

I have had responsibilities in my life.  In my teens, I vectored planes in on bombing runs as a radioman in the Navy.  I was Chairman of a Building Comittee that built a church when I was not much more than a teen.  In Industrial Management the pressures of the job were at times over powering.  I've had the responsibility for handling serious amounts of investment money for a lot of good people.

Most important, responsibility-wise, I have been a father.

At the age of 80, twenty years into retirement, you'd think my responsibilities would be behind me.  Not so!  Although my current responsibilities do not effect so many people, they are indeed serious. 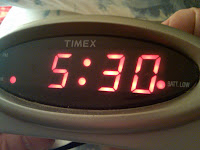 My clock is set for 5:30AM.  I quietly get up and slip out of the bed room without awakening my wife.  After "taking care of business", I plug in Julie's curling iron to heat it up for her.  Then, with my Gunner dog, I slip down the stairs.
JULIE DOES NOT SET AN ALARM, IT IS UP TO ME TO CALL HER FOR BREAKFAST AT 6:15AM.
I let the dog out, walking out on the back deck in my PJs, checking the weather.  Yes, in the winter it is a quick check indeed.  I'm hoping it is clear tomorrow.  It is supposed to get up to around 55 degrees and I need it to be dry so I can prune my fruit trees down at the lake and apply dorment spray.  It is total overcast as I go to bed. 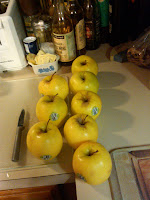 I always plan my meals in advance, even breakfast.  Tomorrow morning will be one of Julie's favorites, Fried Apples with fresh baked Biscuits and bacon.  I have washed eight large, golden delicious apples and laid them out with a knife.  I will core and slice them and cook them in their skins with salt, sweetner, and lots and lots of cinnamon.
No, we don't eat like this every morning.  More often than not Julie will eat Cream of Wheat and one sausage patty.  I'm a Grits or Oats guy, although sometimes I also eat Cream of Wheat.  I do all sorts of eggs.  I have the touch but simple scrambled eggs are Julie's favorite, I think.  We've had blueberry pancakes recently. 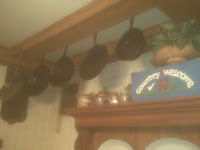 I cook in iron skillets.  I haven't counted them lately but I must have at least 25 or 30 skillets of all sorts.  I use cast iron.  I've selected my Mother's cast iron skillet for tomorrow.  This skillet will go to my grand daughter Delanie Rose when I no longer have a use for it.
I have sprayed it with Pam and put a large pat of butter in it.  The apples will be covered and cooked rapidly until they cook up. Regardless of when you arrived at my Mother's home, out would come this skillet as she fed you without asking if you were hungry. 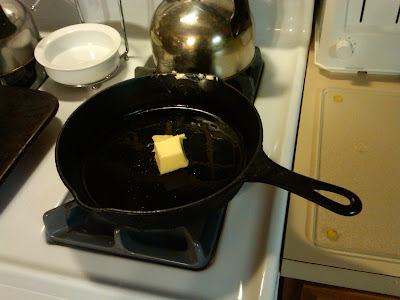 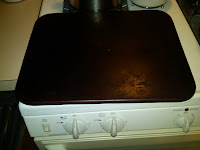 I can and sometimes do make biscuits, but not very often.  I cannot bake a better biscuit than the frozen ones I buy from Sam's Club.  I think there are 36 biscuits in the bag.  Julie will have each biscuit individually wrapped for me.  If you do not wrap them, which I guess is a pain to do--I have never done that, it's obviously "Women's Work", the biscuits will all blend together in one huge mass of dough.  I bake them on a stone for 25 minutes at 400 degrees and them check them until they are browned to satisfaction.  I have laid the stone out so I can just preheat the oven when I first get to the kitchen. 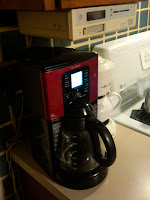 Coffee?  Sure, lots and lots!  I drink mine black, like God intended, Julie uses half and half and a lot of it.  We switch coffee back and forth between Chase & Sanborne and "good to the last drop" Maxwells.  Right now it is the Chase & Sanborne.  I use ten cups of water and two rounded scoops of coffee.  It is fair to middling strong.  Not like my son Todd's strong, but just "fair to middling" strong.  I love the week Todd and Amy and their friends Dave and Karen are with us at Myrtle Beach.  They are really coffee lovers.  They buy special blends and you never have to lean the spoon on the edge of the cup.  IT WILL STAND STRAIGHT UP!  The coffee is made, I just have to turn it on. 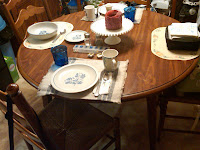 The table is set.  The dog, who waits patiently, OUT OF THE KITCHN, Julie doesn't allow him in the kitchen, gets so excited when I go to the bottom of the stairs, turn on the upstairs hall light and call Good Morning, Julie-Girl!  It's breakfast time.  Come and get it!  What Gunner hears is HURRAY, ITS FINALLY TIME TO EAT.  He eats when I do, twice-a-day.  My dogs have always completely cleaned their dishes when fed.  They are fast learners, when I dump the food that is left in their dish when I'm through eating.  Un Huh!

Julie's other special meal, which I love to fix for her, is potatoes fried with onions, sausage and scrambled eggs.  She fusses at me every time I fix this, however, she eats every bite as she tells me to just give her cottage cheese tomorrow.  GUILT?  This morning it included french toast instead of potatoes.  Sausage gravy & biscuits?  Once a month.
When we were first married I knew the "honeymoon" was over when I served her about one third of the fried potatoes and I took two thirds.  At that time she was just a little thing and I have always been a horse.  She let me know in short order that she did not get her "FAIR SHARE" of the potatoes.  HOW FUNNY!  We still laugh at that but I now fry a lot more potatoes.
WHAT MERIT DOES THIS BLOG HAVE?  It just goes to show that even when you are "Older than Dirt", there can still be work for your hands to do.
Take care and God bless!
Posted by Walt Pierce at 2:32 AM

Dad, I think this blog post of all you have written over the years may be my most favorite. It's so personal. And I love, love, love the photos. The fact that you posted it after two in the morning when you also will have a 5:30 am wake up call says alot too. Plus I've enjoyed your cooking. My mouth is literally salivating after reading this post. Love you much! Mark