A SHUT DOWN OF THE UNITED STATES GOVERNMENT IS HOURS AWAY!  Why?  Politics, pure and simple.  It has nothing-what-so-ever to do with the writing of a budget.  The budget for 2011 should have been written in October of 2010. 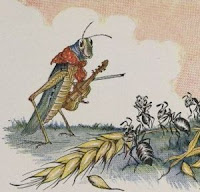 In 2010 the Democratic Party had full control of the government, both houses of Congress and the Presidency.  They did not write a budget, in my opinion, because they did not want any constraints on their spending, transfer of assets from the working ants to the fiddling grasshoppers of our American society.

Consider the sudden peak in deficit spending to accomplish their irresponsible goals.

﻿IS A GOVERNMENT SHUTDOWN UNAVOIDABLE?  Of course not.  The new Republican House, recently elected by concerned citizens, has put forth a budget.  It was voted down in the Democratic Senate and, if passed, the President would have vetoed it.
Dick Morris has explained repeatedly on Fox News that a shutdown could easily be avoided by simply picking certain bills not to pay for a month or so, like we might do in our personal household.  He suggested not GIVING MONEY TO OTHER COUNTRIES.  Wow!  That would seem a non brainerd, huh?


I had trouble finding recent statistics on this "give-a-way" but in 2006 we "gave" $52 MILLION to Russia and $94 MILLION to India.  I don't know why we would ever give money to Russia and India is taking all our jobs and we're giving them money to help them do it?  I wrote about this very thing on November 20, 2010.
In 1933 FDR signed into law WITHOUT A VOTE OF CONGRESS taking the USA off the Gold Standard and onto a IOU standard, if you will.  Since the founding of our Republic, a period of 157 years, until 1933 THERE WAS NO INFLATION because the U.S. currency was Gold and Silver.  Once again, WITHOUT A VOTE OF CONGRESS our country was changed into a DEBTOR NATION.
Today deficit spending has reached such enormous levels that our obligations exceed our total income.  WILL OUR CURRENT PRESIDENT LEAD US OUT OF THIS SITUATION?  Consider his projected budget and decide for yourself. 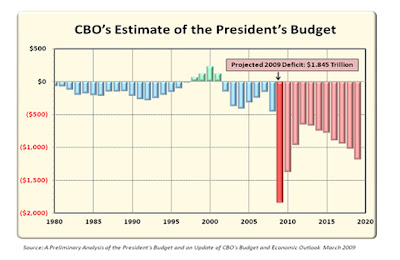 So, what do we do now?  WHY WE PRINT MORE MONEY, WHICH IS WORTHLESS AND SPEND MORE AND MORE.  DOES THIS WORK?  No!  It leads to hyper inflation.  Consider what happened in Germany when they tried this--IN MY LIFETIME! 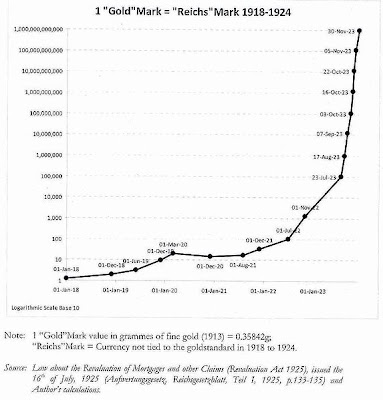 ﻿Zimbabwe just went this route.  It now takes a trillion Z-dollars to buy a loaf of bread, when there is bread to buy.  Put another way, when the above happened in Germany, it took a wheelbarrow load of money to buy that loaf of bread.  THE GERMANS ARE NOT IDIOTS!  I can't speak about Zimbabwe but I've been to Germany a number of times and they are truly bright people.
The current administration estimates that the National Debt will nearly double again over the next decade.  When you factor in this with the fact that interest rates are at current historically low rates, it is expected that the INTEREST PAYMENTS ALONE on the National Debt will climb to 50% of the TOTAL U.S. Income.
My friends, do not be like the storied frog that will jump out of hot water but will remain in cool water that slowly comes to a boil and dies.  DO NOT WAIT FOR THE 2012 ELECTIONS, although by all means be active therein.  CAN YOU SAY TEA PARTY?  Get involved now.  It is our country just as it was our founders.  Don't just sit there, get involved or get out your wheelbarrow to go in search of a loaf of bread.
I AM NOT A HYSTERICAL PERSON AND I AM NOT AFRAID OF ANYTHING, (although I am very careful around snakes).

I have just presented undeniable facts as they exist.  We are no smarter than the Germans.  We are no smarter than our parents when the government took one half of money from people who had worked and saved it and gave it, after taking out a chunk for themselves, to the non-workers.  THIS HAPPENED IN MY LIFE TIME.  Got Gold?  The government took it!  Money in the bank?  The government closed the banks!
The Boy Scout Motto has never been more important than now.  BE PREPARED!
Take care and God Bless!
Posted by Walt Pierce at 7:46 PM

Dad, I want you to know how much I appreciate the work you put into writing your blog. Excellent article. Well articulated and defended. Keep up the good work!