JUST A FUNNY OR TWO: Chase Away the Doom of a Cloudy Day! 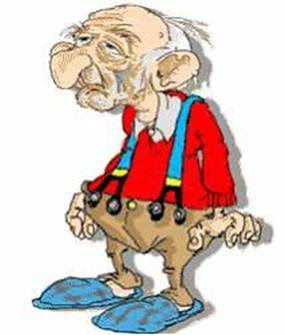 'IT'S TRUE!  I'VE GROWN OLD! Not bad considering the alternative!
My pretty wife of 32 years is mowing my overgrown west lawn at our lakeside retreat, finishing just as it started to rain again.  Donna picked up fruit tree prunings.  I need to do some roof repairs here but cannot do so until it is dry and above 50 degrees.  I just checked the weather and that won't happen in the next week.
If you are as tired of the seasonal GLOOM AND DOOM as I am, let me share some funnies.
﻿GENERATION Y, WHY?
People born befor 1946 were called THE SILENT GENERATION.
The BABY BOOMERS are those born between 1947 and 1959.
GENERATION X people have been born between 1960 and 1979.
GENERATION Y were born between 1980 and 2010.
Why do we call the last group GENERATION Y?
I always thought it was because they say.......
Y should I get a job?
Y should I leave home and find my own place?
Y should I get a car when I can borrow yours?
Y should I clean my room?
Y should I wash and iron my own clothes?
Y should I buy any food?
Then a cartoonist explained it very eloquently below: 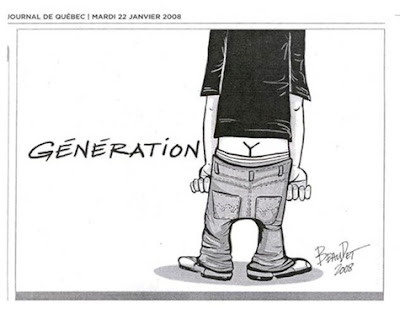 TURN ABOUT IS FAIR PLAY, RIGHT?

A DEA officer stopped at a ranch in Texas, and talked with and old rancher.

He told the rancher "I need to inspect your ranch for illegal drugs."
The rancher said "Okay, but don't go in that field over there"..., as he pointed to the location.
The DEA officier verbally exploded saying "Mister, I have the authority of the Federal Government with me!"
Reaching into his rear pants pocket, he removed his badge and proudly displayed it to the rancher.   "See this BADGE?!  This BADGE means I am allowed to go wherever I wish...onto any land!!  No questions asked and no answers given!!  HAVE I MADE MYSELF CLEAR, do you understand?!!
The rancher proudly nodded, apologized, and went about his chores.
A short time later, the rancher heard loud screams, looked up, and saw the DEA officier running for his life, being chased by his big, prized, Santa Gertrudis bull.......
With every step the bull was gaining on the officier, and it seemed likely that he'd sure enough get gored before he reached safety.  The officier was clearly terrified.
The rancher threw down his tools, ran to the fence and yelled at the top of his lungs......
"YOUR BADGE, SHOW HIM YOUR BADGE......!!
..................................................................................
BTW, you  might be wondering what we do at our little, lakeside retreat in cold, rainy spring weather.  I'll tell you.
Julie and Donna and I got here a bit before dark last night after taking our daughter and family out for dinner.  After "carrying in", a chore because Julie will bring "more" all season long, Julie and Donna cleaned.  I always clean before they come, but I got confused about what day it was and had to run leaving everything in my verson of "life at the lake" when I realized it was Saturday instead of Friday.
When everything was in order, we watched movies until nearly 4AM, ending with A Walk in the Clouds, a favorite of ours that Donna hadn't seen.  Although I did have to get up at 8AM to let the dog, Gunner, out to take care of his business, and eat grass, we all slept in until nearly 11AM.  Julie fixed a great breakfast and we all went shopping for the day.  Uh, I took my Kindle and finished another book!  They went to Lowe's, Aldis, Big Lots, Krogers, Farmer's Fleet and Walmart.  I kept the Kindle company in the van.  What did they buy?  Nothing to brag about.
We didn't get home until nearly 7PM, and Julie fixed an awesome Gumbo Creole.  Was it spicy?  The dessert was banana split ice cream.  At the first bite, steam streamed out of Donna's mouth to keep the tears streaming down her cheeks company, as she kept muttering something that sounded like "Oh! My Acid Reflux"!  Un Huh!
Dinner is over, IT REALLY WAS GREAT AND WE HAD SO MUCH FUN WATCHING ONE ANOTHER COPING WITH THE SPICE!  Big Chunks of sausage and chicken to go with the okra in a delightful rue.  YUMMY!  They are cleanning up after which it will be movie time again.  Tonight's feature?  Return To Me, another favorite of ours Donna hasn't seen.
LIFE IS GOOD AT THE LAKE!

Remember what Henry Wadsword Longfellow had to say - "Into each life some rain must fall"..