Once, when the family was playing a game, I think it was called "Scruples" where one's answer to an ethical situation could be challenged, my lovable daughter-in-law, Mary Kay, shown here receiving a Nursing Award, said "No, she would not steal food, even to feed her hungry children".

No one challenged her negative answer because she is such an honest person.  I did tell her, however, that she had never had hungry children so she didn't really know the answer.  Although she would pray for forgiveness as she took the food, in my opinion, she wouldn't hesitate to take food to feed her children.  But, then I could be wrong.

I am not wrong when I recall how honest people took what was not theirs to take in extremely difficult economic times.  I've walked with my Dad, when I was just 4 or 5 years old, as he walked through a corn field that he didn't plant, carrying the corn as he picked it.  It was field corn but no one was choosy in the Great Depression.

UH, NO, I DON'T RECALL DAD ASKING FORGIVENESS, AT LEAST NOT AT THE TIME!

THIS IS NOT THE GREAT DEPRESSION!  And, what was stolen from my wife Julie was not food for hungry children.

SOME WORTHLESS PERSON STOLE SEVEN OF THE ROUND, RIVER ROCKS FROM HER ROCK GARDEN!  Those rocks are pretty heavy.  I'm sure whoever took them used a car, meaning it was an adult.

It is not a great loss, in fact, I have spare rocks down at the lakeside retreat just like the one's that were lost.  IT IS JUST THE PRINCIPLE OF THE THING.  If they would have asked about the rocks, I would have given them seven rocks!


When the flowers around the large maple tree were mature, last year, it was spectacular!  It added greatly to the beauty of the community.  It adversely effected no one.  It brought joy, not only to my wife, but to all who drove by the house.  Some stopped to take pictures.
WHAT MAKES THIS WORTH A BLOG?  If people, in relatively good times, will steal something as worthless as a round, river rock, what would they do in extremely difficult times?  YOU WOULD DO WELL TO ANSWER THAT QUESTION FOR YOURSELF BEFORE IT BECOMES IMPORTANT.
WILL THIS SPOIL MY DAY?  Not in the least! 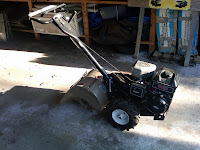 This morning a repairman is coming to repair the depth control on my roto tiller.  I am then having lunch with my lovely daughter, Kimberly, and touring a Napa-like Vineyard for an outing with my Dining Group.  IT IS GOING TO BE A GREAT DAY.
THE SUN IS SHINING, THE BIRDS ARE SINGING AND THE BEES ARE ALL MAKING HONEY!  Doesn't get any better than that!
Natalie Clifford Barney:
"Why grab possessions like thieves, or devide them like socialists, when you can ignor them like wise men"?
God Bless!
Posted by Walt Pierce at 9:27 AM