DEMONIC BY ANN COULTNER: Made Plain and Simple by Cheryl

I like Ann Coultner.  She upsets the extreme left politicians like no one else can.  She upsets them to the point that they attack her at her speaking engagements.  She must have constant body guards.  She is sassy and speaks out with vim and vigor in plain words which cannot be misunderstood.  She is often a guest on Fox News. 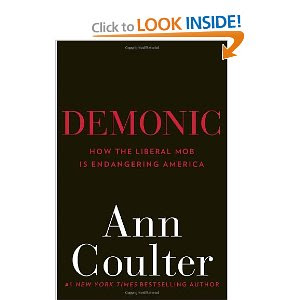 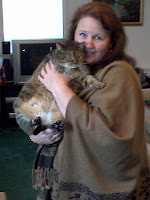 My cousin Cheryl, shown here with her attack cat, with a lot fewer words, made the point Ann Coultner needed an entire book to make.  Cheryl, a recent college grad, just returned from a visit to Seattle, Washington.  She will join with the family for a week at the beach in October.  We sure look forward to those good times.  Here is Cheryl's email. 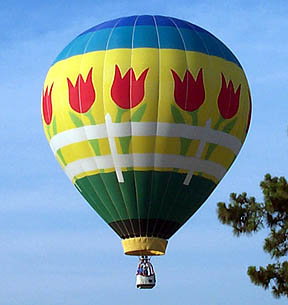 THE HOT AIR BALLOON
The woman in the hot air balloon realized she was lost.
She lowered her altitude and spotted a man
in a boat below.  She shouted at him,
"Excuse me, can you help me?
I promised a friend I would meet him
an hour ago, but I don't know where I am."
The man consulted his portable GPS and replied,
"You're in a hot air balloon,
approximately 30 feet above ground elevation
of 2,346 feet above sea level.  You are at 31 degrees, 14.97 minutes north latitude and 100 degrees,
49.09 minutes west longitude.  You are drifting east
on a compass bearing of 097 degrees at
about five miles per hour"
She rolled her eyes and said, "You must
be a Republican."
"I am," replied the man.  "How did you know?"
"Well," answered the balloonist, "everything you told me is technically correct.  But I have no idea what to
do with your information, and I'm still lost.
Frankly, you've not been much help to me."
The man smiled and responded, "You
must be an Obama-Democrat."
"I am," replied the balloonist.  "How did you know?"
"Well," said the man, "you don't know where you are,
or where you are going.
You've risen to where you are, due to a large
quanity of hot air.
You made a promise you have no idea how to keep,
and expect me to solve your problem.
You're in exactly the same position you were in
before we met, but somehow,
now it's my fault."
﻿Well, that's the story.  Hope you get the point?  PLAN TO VOTE!
Take care.  Smell the roses.
God bless.
Posted by Walt Pierce at 10:03 AM

First thing I read from you in my 63 years and ......How are you doing Uncle Walt? I'll have to think about this one. Betty Lou