EVERYONE LOSES IN A FIGHT: Some Things Are Worth Fighting For!

Although said in jest, it was more truth than fiction.  Most fathers teach their children to walk and play patty cake.  My dad taught we boys to bob and weave, jab and cross.  He made us fight.  He made us fight bigger kids we couldn't possibly whip.  Third generation Irish, he considered fighting to be sport. 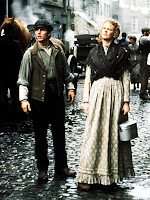 Did you see the movie "Far and Away"?  It was filmed in Ireland, in County Kerry, nearby old Dingle town, an area I love.  The movies showed the three brothers fighting for the fun of it.  My older brothers stopped fighting me when I was about 13.  Brother Ray could no longer whip me and brother Henry got hurt too much trying.

I lived alone when I was in high school and one night, when I didn't know the boys were even in West Virginia, they sneaked into my bedroom in the dark, grabbed me and started to strangle me, all in fun.  When they got my attention to let me know who it was, Ray was down and Henry was hurt.  The bedroom, it was destroyed.  FUN?  In fairness, the boys didn't want to hurt me while I desperately wanted to kill them.  FUN?  Hardly! 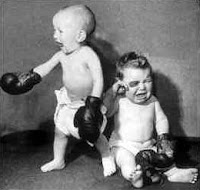 I taught my boys to fight, using boxing gloves.  At least a couple of times I successfully coached them to defend themselves against larger bullies.  But, I had a different opinion on fighting, which I shared with them.
NO ONE WINS IN A FIGHT!  EVEN IF YOU COME OUT AHEAD, YOU GET YOUR HANDS ALL BUSTED UP.  IF YOU COME OUT BEHIND, YOU GET YOUR NOSE BUSTED AND      YOUR EYES CUT DOWN.  NO ONE WINS!  In Mark's case, in the 1st grade, he got sent to the principal's office.  But Big, Bad Freddie never bullied him again!

Still and yet, somethings are worth fighting for, but they are few and far between.  It is most important that we decide what that something happens to be, when and where the fight occurs.

Fighting may have been a sport to my dad but my mom quietly told us that if we couldn't win, "TAKE THE DIFFERENCE" and most important, boxing may be sport but fighting is not.  The only rule in fighting was DON'T LOSE.  Teeth, fingernails, feet, elbows and gouging thumbs have saved my bacon on more than one occasion.
And, so it is  with OPERATION ENDURING FREEDOM  in Afganistan.  My heart, along with that of the entire nation, goes out to the families of the 30 Americans whose young lives were cut short last week, our greatest one day loss.  I am humbled by their sacrifice and the extent of loss to their families.

﻿In the first 8 years of that war, Americans lost 78 troops a year.  In the last two and a half years we have averaged losing 440 troops a year.

It is becoming increasingly clear that Afganistan is not becoming a democracy.  Even if it was, I question that it is worth such loss of American lives, not to even consider the loss of treasure.

When the troops come home over the next year or so, will America be safer?  TO ME THAT IS THE ONLY QUESTION THAT COUNTS!

"WAR IS HELL", said General Sherman when addressing the graduating class of the Michigan Miltary Academy in June 1879.  In the just ended Civil War, Sherman had demolished Atlanta and burnt his way east to the sea.  Sherman was blunt, "EVERY ATTEMPT TO MAKE WAR EASY AND SAFE WILL RESULT IN HUMILIATION AND DISASTER".  I totally agree!
The question is, in Afganistan, was the fight worth it and did we pick the time and place?  I'm not sure our losses in Afganistan can be justifiied.  Not for a single troop and we have so far lost 1,931 troops.
﻿﻿
﻿﻿

On February 19, 1945 General Tadamichi Kurbayaishi, Japanese Commandant on Iwo Jima, had his troops deeply entrenced in fortified caves connected by 11 miles of tunnel.  This small island, the first of the Japanese homelands to be invaded, had air fields that could be used to bomb Tokoyo and other Japanese cities.
America put 60,000 marines ashore without opposition.  Banzai attacks occured at night but otherwise the Japanese waited to be dug out of their steel fortified caves.  Of the 22,844 entrenched Japanese troops, 21,844 died.  AMERICAN LOSSES IN THE 36 DAY BATTLE THAT STARTED ON JUNE 15, 1944 WERE 26,000 CASUALTIES INCLUDING 6,800 DEAD.
Iwo Jima was a fight that was necessary!  We didn't start the war but using the air fields on Iwo Jima to bomb Japan helped us win the war.  I HAVE BEEN TO IWO JIMA.  The fleet tug, USS Yuma ATF94, installed anchor bouys that were later used by the ships there to clean up the crashed planes and damaged landing craft still on the shore when I was there in 1950.
In Germany, the Battle of the Bulge lasted 40 days, from Dec '44 to Jan '45.  IN THAT CONFLICT AMERICA SUFFERED 90,000 CASUALITIES, 19,000 KILLED AND 23,000 CAPTURED OR MISSING!  Again, we didn't pick the fight, we ended it!

In this period of American history there was not one town or one family that was not effected by these losses.  I lost family.  I lost close friends of the family.  So did every family in town.  Sadly, these losses were made necessary by others.  We did not have a choice.  We did fight to win!


If you should question the use of atomic bombs against Japan, you may have changed your mind after a conversation with my now deceased brother, Ray, who was enroute to the invasion of Japan when the two bombs ended the war.  He had no doubt in the fact that we followed our mother's advice and "took the difference".
War is hell!  Even if we are victors, we lose.  Let us get our remaining troops home.  I would not choose to make this fight and do not want others to do so for me.

God bless you and  yours.

God bless our miltary, on the land, in the air and on the sea.

May He give our leaders wisdom and the courage of their convictions on our behalf.