HISTORY: Those Who Do Not Learn From It Are Doomed To Repeat It!

Riots have now been going on in London for three days and has now spread through out this extremely large, world class city which I love.  It has spread to Liverpool and Birmingham.  There is extreme violence, the police are attacked, cars are set ablaze and shops are destroyed and looted.

A 28-year-old Mob Leader, a self described anarchist, claims "THIS IS AN UPRISING OF THE WORKING CLASS.  WE'RE REDISTRIBUTING THE WEALTH".

Does this sound familiar?  Can such a thing happen here?  IT HAS, MANY TIMES!  It is my opinion that with the aim of the current political leadership being to REDISTRIBUTE THE WEALTH, should really difficult times come, London riots will pale in comparison to what shall happen in America.
During the summer of 1968 rioting broke out in the Watts area of Los Angeles over white policemen making a routine traffic stop of a black man.  When spectators of the traffic stop started to yell and throw rocks and bricks, a full blown riot was born.  Just that simple.  Angry mobs assaulted white motorists.  Snipers shot at the white press.  Arming themselves, shouting "Burn Baby Burn", the rioters continued to burn the city, loot shops and attack police for four more days.  Other cities across the country experienced similiar riots in support of the Watts riots. 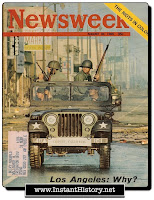 Only after 14,000 National Guard troops were sent in to assist the 1,500 policemen did peace return.  The official death toll was 34 and the injured 1,000.  Rioting again took place in Watts in 1992 although great effort was put forth to pacify the 250,000 African Americans living in Watts.  Between 1989 and 2005 there were over 500 homicides in Watts.
In my opinion, the odds are better than even that America will see riots again withing the next 5 to 10 years.  Nation-wide riots.  Riots in your neck of the woods.
Not meaning to frighten, just wanting to alert us all to the possibility!
I think it is prudent to have food and water to support you and yours for a minimum of six months.  Equally important, I think you should give serious thought as to how you can protect what you have saved.  If you haven't given any thought as to what you would do if mobs like you see in the picture below came down your street, now is the time to think about it.
IF YOU STICK YOUR HEAD IN THE SAND AND JUST IGNORE SUCH A POSSIBILITY, YOU MAY BE DOOMING YOURSELF TO REPEAT HISTORY. 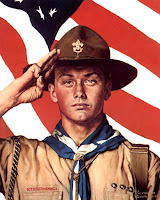 Do I live in fear?  Absolutely not!  Why should I? I know the Boy Scouts have it right, BE PREPARED!  I am!  I have planned.  Now I enjoy life trusting in God's mercy.

God Bless you and yours.  God Bless the USA.