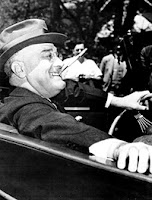 President Franklin D. Roosevelt is not one of my favorite presidents.  He deserves credit, however, for building up the U.S. Navy during a period of great financial crisis in America.  He had been Secretary of the Navy and among his other farsightedness, he had the wisdom to have constructed two new aircraft carriers.  Exactly what price could be put on the value of the USS Hornet and the USS Enterprize, which along with the USS Yorktown and USS Lexington, won the Battle of Midway, turning point in the war?  Priceless!


The Coast Guard polices the seas and waterways around America.  The Navy projects U.S. power around the globe.  Both are absolutely necessary, maybe more now than ever before!

The fleet of high endurance Coast Guard Cutters built during the Great Depression could sail deep into the open sea and remain there for extended periods in any weather.  Known as "Treasury Class" cutters, named after former Secretaries of the Treasury, these ships served us well for 40 years.


In World War II they not only protected our coasts, they also performed convoy escort duty.  THEY MAY HAVE HELPED MY BROTHER HENRY IN THE NAVY ARMED GUARD, PROTECT HIS SHIP, THE SS WYOMING VALLEY, A TANKER CARRYING HIGH OCTANE FUEL, ACROSS THE ATLANTIC.
The next class of cutters, the "HAMILITON CLASS" was built to enforce the 200 nautical miles out to sea from our coast lines.  Protecting our sovereignty over this zone is vital to our national economic interest.  They protect fisheries and oil rigs.  The fisheries in the Bering Straits account for about half of our commercial fishing revenues.  From the Cuban boat lift to Hurrican Katrina, these ships have been on station serving the nation for more than 40 years.  They are at sea right now!
Now, it is time for a new class of ships:  The "NATIONAL SECURITY CUTTER".  These new cutters are built to meet today's threats:  illegal immigration flows, highly sopisticated drug trafficing, deep water oil platforms, pirates and natural disasters such as Hurricane Katrina.  Most importantly, it is modernized to more efficiently patrol U.S. territories equipped to detect  the threat of terrorists.

Three new cutters have been built.  If the Office of Management and Budget of the Obama Adminstration has its way, the Coast Guard will not get any more of the previously scheduled cutters.  The Hamilton-class cutters were built for the cold war era.  They are wearing out and are otherwise obsolete.  It would cost as much to upgrade a Hamilton-class cutter as it would to build a new cutter.

The new cutter's capability really matters.  Presence at sea is what ensures the sovereignty of American territory at sea.  Sacrificing capability means sacrificing sovereignty.  As President Obama travels around the world apologizing for the American way of life, our sovereignty probably doesn't mean much to him.  IT DOES TO ME!  I BET IT DOES TO YOU, TOO!  But then, we never before had a president who felt the need to humble himself, bowing and kissing the ring of an Arab King, did we?  Of course I've never been this close up to the leader of Congress either, have you?

Abandoning the new cutters as a budget-cutting drill make about as much sense as you disconnecting your burglar alarm system, putting a "No Trepassing" sign in you your yard and explaining to your spouse and children that your new, cost-cutting plan has beefed up security.

But, then, to someone who thinks Americans will buy JOBS SAVED as a trade off for growing unemployment thinks we will believe anything.  I KNOW BETTER.  YOU DO TO, HUH?

We simply dare not return to the weak military days of Jimmy Carter.

God bless you and yours.  God bless the USA.
Posted by Walt Pierce at 1:42 AM