THERE'S CHANGE: And, Then There's Change!

Home after a month in jail!

Nah!  I wasn't really in jail, but it seemed like it.

I returned to the lake too soon with my strained back and wasn't able to do any physical work.  (Just having a new hip to deal with was bad enough!).

While I was home nursing the back, the power had been off at the lake.  My computer had been down and I couldn't get it up and couldn't figure out why until I tried to buy a book on my Kindle.  The Kindle told me I needed a wifi.

My son, Mark, had installed a wifi last spring for me at the lake, because I am isolated there, but for some reason I couldn't figure out, it isn't working.

I found out, however, just how addicted I am to the computer and the Kindle.  I tried reading a book after eight months with a Kindle.  It was awful!

Any hoo, thats why I haven't been blogging.  Quite late tonight, I've been out with the dining group, but I'll share an email with you that I received from the west coast before I go to bed.

Hint!  They're not all Liberals on the left coast.
There's an old sea story

about a ship's Captain
at a Saturday morning inspection.
After inspection he told the
Chief-of-the-Boat
that the crew smelled bad.
Duty gets pretty relaxed on sea going tugs,
but the Captain suggested
to the Chief that perhaps it might
help if the crew would change underwear occasionally.
The Chief responded" Aye, aye sir,
I'll see to it immediately!"
The Chief went straight down below
the fantail to the crew's
quarters and announced,
"The Captain thinks you guys smell
bad and wants you to change
your underwear."
He ordered, "Ratazak you change
with Bauer, Tucker, you change with
Painter, and Easter, you change
with Shorty Fowler."

(I knew these guys, their shorts probably did stink!)
THE MORAL OF THE STORY:
Someone may come along and promise
"CHANGE"
but don't count on things smelling any better. 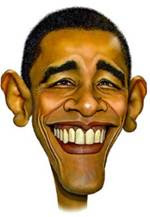 NO, NO, NO!  I AM NOT BIASED, I AM BEING FAIR AND BALANCED!  I MEAN THIS IS A REPORT FRESH FROM THE "LEFT" COAST YOU KNOW!

Be sure to vote!

God Bless you and yours.