AMERICA, YOU'RE BEING BRAIN WASHED! Wake Up! REVISED EDITION

I will lift mine eyes unto the hills, from whence cometh my help.
My help cometh from the Lord, which made heaven and earth.
Psalms 121:1-2 KJV
In 1947, Miss Mary McCollough, senior English teacher, taught me this scripture, explaining it's meaning.  I memorized it and it has been a "hand hold on reality" for me ever since.  She also taught me the poem Invictus by William Ernest Henley, from which another of my life's guides was taken:
It matters not how strait the gate,
How charged with punishment the scroll.
I AM THE MASTER OF MY FATE
I AM THE CAPTAIN OF MY SOUL
AMERICANS ARE LESS AND LESS THE MASTER OF THEIR FATE AND THE CAPTAIN OF THEIR SOULS
AMERICANS ARE WHAT THE MASS MEDIA TELLS THEM THEY ARE
AMERICA IS BRAIN WASHED DAILY

ASK YOUR SELF
HOW DO YOU SEE GEORGE W BUSH
HOW DO YOU SEE BARACK HUSSEIN OBAMA
MAKE A NOTE OF THE EXPRESSION ON THE FIRST LADIES FACE
The Facts, just the Facts, mam!
George W. was the oldest of six children.  His father was the 41st President.  His maternal grandfather was a U.S. Senator.  His brother is a governor.  He is from a long line of hard working, successful American family members on both sides of his parents.  He attended the same Phillips Academy as his Dad and graduated from Yale like his Dad.  He was president of his fraternity and a member of the renown but secretive Skull and Bone Society.  He was commissioned a 2nd Lieutenant and qualified as an Air Force fighter pilot.  After his military service, he received an MBA from Harvard.
Under the influence of his wife Laura (Welsh) Bush, he gave up alcohol at the age of 40 as a self described spiritual awakening and a strengthening of his Christian faith.  In 1994 his achievements as Texas Governor was such that the Texas voters increased the term of office from 2 years to 4 years then reelected him to a second term.  He was elected as number 43 in 2000 and was reelected in 2004. 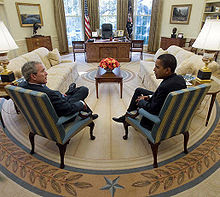 Barack Hussein Obama's father was a Luo from Nyang'oma Kogelo, Nyanza Province, Kenya, Africa.  His mother was from Wichita, KS.  In his book Obama described his father as "Black as pitch" and his mother as "White as milk".  Married in 1961, his parents divorced in 1964.  His father returned to Kenya, his mother remarried an Indonesian.  The family moved to Jakarta where Obama attended school from age 6 to age 10.  With a scholarship, he attended Punahou, a private prep school.  He described his drug use in high school as "A great moral failure".
He entered Occidental College in 1979, but in 1981 he dropped out and went to Indonesia to be with his mother and sister.  He returned to the U.S. and graduated with a BS in 1983 from Columbia College.  He graduated magna cum laude with a JD from Harvard in 1991.  His presidency of Harvard Law Review led to a publishing contract for a book published in 1995.
He was a lecturer for 12 years at the University of Chicago and became a litigator in a law firm specializing in civil rights litigation from 93-96.  He was elected to the IL Senate in 2002, ran for but lost in an election bid for the U.S. House of Representatives in 2005.  He became a U.S. Senator in 2005 but resigned in 2008 to run for the president, which he won . 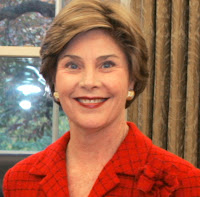 I SAID TO MAKE A NOTE OF THE LOOK ON MICHELLE OBAMA'S FACE ABOVE.  You can't even imagine such a look on the face of Laura Bush!  Word leaked out a while ago on Michelle Obama's tempermental intrusion into her husband's cabinet, with swear words exchanged.  THAT WAS QUICKLY SQUASHED BY THE MEDIA!  All you will see of the first lady, and you will see a lot, is "sweetness in life", wearing dresses from Target, supposedly, and doing her part to make America more healthy, starting with the children's school lunches.
﻿HOW DO THESE FACTS MATCH WHAT YOU SEE IN THE MEDIA?
Mass media by its omnipresent nature, creates a living environment we evolve in on a daily basis.  It defines what is normal and what is undesirable.  The same way a plow horse wears blinders so that they see only the desired row in which they are to pull the plow and not the lucious green corn they are walking through! 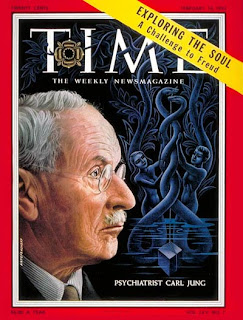 In 1928, when "talkies" were new, Edward Bernays saw motion pictures as the great unconcious distribution for ideas and opinions on the world.  He could not even imagine today's television.  In 1939-40, Rockefeller funded a grant for a secret seminar on communication.  In it, Harold Lazwell, a leading political scientist, opined that "We must recognize the ignorance and stupidy of the masses and not succumb to democratic dogmatisms of their own interests".  In 1955, Carl Jung, seen here on the cover of Time, on the ability of media to "Manipulate the public's personal and collective unconsciousness".
BRAIN WASHING!
WHAT'S SO SCARY IS THAT IT IS NOW BEING CONTROLLED BY SO FEW
CHECK OUT THIS CHART

WE MAY THINK OF THESE MEDIA OUTLETS
AS NECESSARY IN TODAY'S LIFE STYLES.
IN THE HANDS OF SUCH A SMALL, RULING, ELITE GROUP
WHAT WE MAY HAVE IS A SILENT DICTATORSHIP
BUT WHAT DIFFERENCE CAN IT MAKE?
LET ME GIVE YOU AN EXAMPLE
The U.S. Census Bureau estimates that African-American, Hispanic, Asian and Multi-racial will collectively represent a majority of the U.S. population by mid century.  Interracial in America is now 8.4% of the population, up from 3.2% in 1980.  I don't worry about the Asians, they are a boon to the country, at the top of every college graduating class and leaders in industry and business.  The other three, however, are kept under control by the brain washing of the media and guile of the politians for their own selfish reasons, making this group a constrant drain on American society by keeping the group at less than their best.
GIVE A MAN A FISH AND YOU FEED HIM FOR A DAY.
TEACH A MAN TO FISH AND YOU FEED HIM FOR A LIFETIME
Chinese Proverb
I've had it up to here giving fish but I will gladly give of my time and means to teach fishing!﻿
THINK ABOUT WHAT YOU SEE IN THE MEDIA 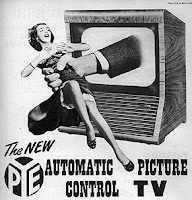 In advertisement after advertisement, you will see that the person in difficulties, needing help is white, old, and, probably, male.  The wise, benevolent person will probably be African-American or interracial.  Children will be explaining things to their parents.  The beautiful wife will be explaining things to her stupid husband.
THE CONTROLLING MEDIA LOVES THE GROUP THAT IS THE LOWEST IN SOCIETY, THEY ARE EASIEST TO CONTROL.
THEY HATE THE TEA PARTY!
I am so proud of my children.
I started to teach them about misdirection the day they were born.
THEY LEARNED THE LESSON WELL
and are passing it along to their children and grandchildren
A LEADER IS ONE WHO KNOWS THE WAY, GOES THE WAY AND SHOWS THE WAY
John C. Maxwell
God Bless You and Yours
GOD BLESS THE USA
IF YOU ENJOYED THIS BLOG
You might also enjoy reading a great example of media brain washing
OCCUPY PARTY OR TEA PARTY:  Is There A Difference?
January 14, 2012

(THANKS MAUDE, GOOD PICTURE AND CHART)
Posted by Walt Pierce at 1:34 PM