PREJUDICED? Not This Blog! REVISED EDITION 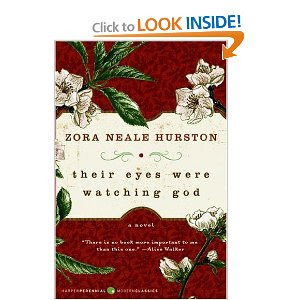 (after Joe buys two hundred acres of land from Captain Eaton) "ain't never seen no sich uh colored man befo' in all my bawn days.  He's gointut put up uh store and git uh post office from de government"
Coker and the rest of Eatonville is amazed at Joe's wealth, ambition and quick action.  They expected such things out of a white man but not one of their own.
In a way, Joe shows that your race doesn't need to limit your ambition or economic success.
EVEN IF PREJUDICE MAGICALLY CEASED TODAY, THE BURDEN OF THE PAST REMAINS.  Evelyn B. Pluttar
A faithful reader considered my last blog, AMERICA, YOU'RE BEING BRAIN WASHED to be prejudiced.  If I know my own heart, and I do, there is not a prejudiced bone in my body, although I came from a childhood in a southern state where segregation was prominent.  My great grandfather, Indivan Pierce, was grieviously wounded fighting on the Union side of the American Civil War.  Had I been there, I would have been at his side.
The offending statement was that the minorities were a drag on society which is being covered up by the misleading media.  THIS IS NOT PREJUDICE, THE COLOR OF THEIR SKIN HAS NOTHING TO DO WITH THE FOLLOWING TRUTHS:
Less than half of black families are married couples
Large disparities exist in high school drop out rates for blacks and Hispancics.
30% of African-American males in prison or on probation for crimes they committted
"When any prevailing prejudice is attacked, the wise will consider, and leave the narrow-minded to rail with thoughtless vehemence......" Mary Wollstonecraft.
"And, ye shall know the truth and the truth shall set you free"
The words of Jesus recorded in St. John 8:32
THESE ARE TRUTHS HAVING NOTHING TO DO WITH SKIN COLOR
A TRUTH:  While whites (non-Hispanic) still comprise a vast majority of the population, twice as many African-Americans are high school drop outs than white and four times as many Hispanics.
A TRUTH: High school graduates, on average, live longer, are more likely to be employed and are more likely to raise healthier, better educated children.
A TRUTH:  The higher rates of umemployment, lower earnings cost the nation both lost productivity and reduced tax income.
A TRUTH:  The high rate of out-of-wedlock child birth, single parent families on welfare by African-American and Hispanics is an expense that is a burden to the working class.

Today, you might hear me cough.  That is but the symptom.  The problem is a flu bug.  The drop outs, out-of-wedlock births and criminal behavior is the sympton.  The problem is selfish politians wanting to keep a large portion of our citizens dependent upon the government, an action abetted by the brainwashing of the media.

My mother's people lived by fishing trot lines in the then-clean, Ohio River.  America's trot line has a blessing hanging on every hook.  An oft heard statement in my youth, when running the trot lines, was "I'll stir the boat, you tend the line".  IN THIS BLOG, I'M STIRRING THE BOAT!  WILL YOU PLEASE "TEND THE LINE"?

This is nothing new.  Today, it is the three mentioned minorities.  In other days it was the Jews, the Irish or the Italians.  It is like we are eating rotten potatoes raised in poor, thin soil while just below that thin soil is a vein of pure gold.  The superb minority athletes you see are but the tip of the ice berg.  When America taps into the reservoir of strength within our minorities, America will once again flow with a Niagara of God's blessings. 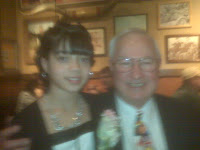 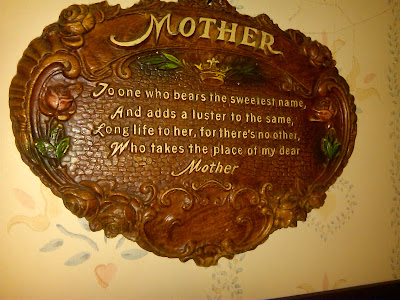 I see the above plaque everytime I sit down for breakfast.  My brothers and sister each took back their reminder of our love for our mother when she died.  IT HAS NOW BEEN 29 YEARS AGO AND I STILL MISS HER SO MUCH!  She positively effected more lives than anyone I know, from people in jail to destitute children.  She prepared rooms full of refurbished dolls to be given to the poor at Christmas time.  She never missed a church service.  She never failed to vote.  She never failed to make the world in which she lived more lovely with flowers.  She never failed to feed you when you arrived at her home, regardless the hour, day or night.  They practically shut down the town, police and fire departments, on the day of her funeral.
THE TRUTH:  My mother was an ignorant, uneducated woman.  Try reading the letters she wrote to me when I was in the Navy, in her "chicken scratch" way, she spelled the word the way it sounded.  She would skin you alive in a game of cards and my daughter's master's thesis described her as the wisest woman she had ever met.  She was still an ignorant, uneducated woman having only gone, part time, to the third grade.  This truth has nothing to do with the color of her skin, it is just the truth.
As Evelyn B. Pluttar opined, as quoted above, "the burden of the past remains".  It is my considered opinion that the media, by misdirection, is trying to justify the situation of these minorities.  Schools are dumbing down, instead of inspiring up.  I have never experienced the burden of slavery.  That being said, I will continue to point out people's "boot straps" instead of providing them with cheaper "flipflops" because it is the right thing to do!.
WALSINEPIERCE.COM IS NOT PREJUDICED!
LIKE SUPERMAN, THIS BLOG IS DEDICATED TO
TRUTH, JUSTICE AND THE AMERICAN WAY
DON'T KNOW HOW TO MAKE IT ANY CLEARER
I'M NOT INTO BRAINWASHING LIKE THE MEDIA 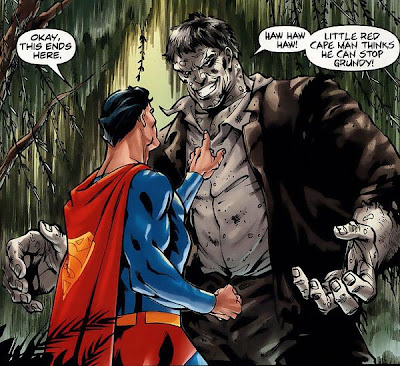 TRAVEL IS FATAL TO PREJUDICE, BIGOTRY AND NARROW-MINDEDNESS,
AND MANY OF OUR PEOPLE NEED IT SORELY ON THESE ACCOUNTS
Mark Twain


FEW HAVE TRAVELLED MORE THAN I HAVE!
God Bless You and Yours
GOD BLESS THE USA
Posted by Walt Pierce at 5:56 PM