YOUR PERSONAL GPS
You might find your life's destination better if you remember
MEMORIES LAST FOREVER, NEVER DO THEY DIE
TRUE FRIENDS STAY TOGETHER AND NEVER SAY GOODBYE 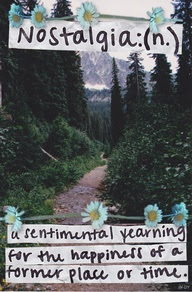 I have a lot of good memories, but I can' t imagine anything more exciting than the life I have now.  Life is so good even at the old age of 82, in 8 more days, March 31st.

That being said, it is interesting how young people today cannot fully understand what life was like when I was a child, great depression or no.

A mechanic, working on my car, asked "When you were a youngster, did your family make ice cream at home a lot?"  ICE CREAM?  There was no ice!  We did not have electricity and there were no refrigerators.  For people who had money, blocks of ice was delivered to homes.

As kids we'd run along behind the ice truck and beg for slivers of ice.  What a treat on a hot summers day.

NOTHING IS REALLY LOST TO US AS LONG AS WE REMEMBER IT
L. M. Montgomery 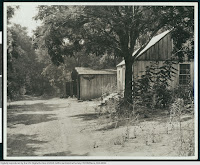 DIRT ROADS - This picture could easily be the street upon which I lived as a child.  The road was dirt.  All the roads, almost, were dirt.  In town there was brick paving and on a few roads there was gravel.  The roads were mostly dirt.

We did not walk the dirt roads.  In the winter the roads were mud above the ankles, in the summer inches of dust.  Everyone walked the railroad tracks, even children.

THE OUTHOUSE - There was no indoor plumbing, water either came from a cistern or well.  We had a hand dug cistern.  No bath, just a path!  Over the hill to the old two hole stink house!

You could always find three things in the outhouse, spiders, flies and the Monkey Ward catalog.  Flies were of course everywhere.  Spiders, I was always afraid of spiders.  The catalog?  Why, you tore off half a page, wadded it up several times to soften it, and you had the "charm'n" of the day.  Un Huh!  Not to worry, new catalog come spring.

THOSE WHO LIVE IN MEMORIES ARE NEVER REALLY OLD - Sharon Repp 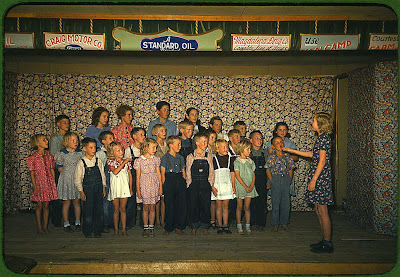 SHOES - Kids did not have shoes in warm weather, most times their Mom's went barefoot also, saving their shoes for "good".

Even dressed up for their school picture, at least 3 of the girls and 4 of the boys in this picture were barefooted.  (click on picture to enlarge).  Notice how dirty the kids feet were.  At least 7 pairs of bib overalls in this  picture.  As a matter of pride, we never wore bib overalls, always a belt.  Bought my youngest grandson, Riley, a belt while he was still in diapers.

MEMORIES ARE THE STARS THAT BRIGHTEN OUR DREAMS
Sharon Repp

STRAW TICS - There were no mattresses.  Instead there were straw tics, which were stuffed full when the wheat was threshed and got thinner month-by-month until the next threshing time.  When the tics were full, the straw would stick you all over.  When the straw broke up in the winter time, it was cold. 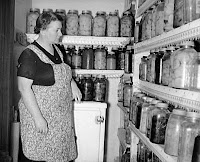 CANNING - Nearly everyone had a garden.  Canning food was a way of life.  The summer time abundance ended with the first frost.  In addition to fruits and vegetables, there were nuts and berries.  Picking berries brings back fond memories.  Up before day light for a biscuit and gravy breakfast and off to the berry fields.  Pick two 3 gallon buckets of berries plus a half gallon picking bucket full and carry them home.  Mom would can the berries and we kids would head for the river to wash off the sweat and the chiggers.   If there was sugar, berry cobbler for dinner.

THE WORLD IS SHAPED BY TWO THINGS, STORIES TOLD
AND THE MEMORIES THEY LEAVE BEHIND.  Vera Nazarian

GAMES - Cards, dominoes, and checkers, no radio, tv or phones
TRAINS - Different names and always hobos, trainmen always waved
CHOPPING WOOD - A never ending chore, cut it up, carry it in, chop more
LYE SOAP - Made outside in a big, black kettle, stuff would take the skin off
CLOTHES - Always hand-me-down and worn out
CARS - Few and far between, lots of horses
NO LAWN - when company came we'd "sweep" the yard, had class!

WORRY - This is the true face of the great depression, worry!  (You must click on this picture to enlarge to get the full impact.) No thought of the good times we just take for granted today.  Americans really did starve to death.  My mother was a real provider for us and for others.  Fishing was a way of life, fished every day almost from early spring until late fall, running trot lines.  The Ohio River was such a blessing for so many things.  Mom also ran a "trot line" for quail, corn on fish hooks.  Rabbit box traps were a steady source of meat.

Worry about my Dad, always.  He was  typical Irish, truly ready to fuss, fight or run a foot race.  Well, never knew Dad to fuss much!  What he said was law.  He made and sold moonshine and sampled his brew a lot, was never a big contributor.

WITH ALL OF TODAY'S CHALLENGES, COUNT YOUR BLESSINGS 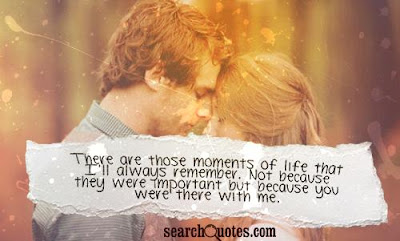 GOD BLESS YOU AND YOURS

Much is of this is familiar because of my dad having things in common with you. I wish he'd known you growing up.